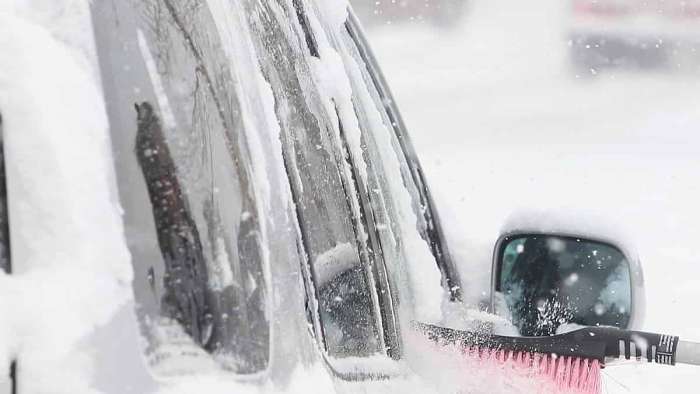 Removing Snow, Ice Doesn’t Have To Be Shattering Experience

Removing snow from your cars doesn't have to be a shattering experience if you do things right. The best way to work things out is slow down to speed up. Try the steps outlined in this article the next time you have to clean your car and things should be a lot easier.
Advertisement

If you have been watching the upcoming weather reports across the country, you probably know that there is a significant storm brewing on the West Coast that will wallop the nation from coast to coast. Weather will vary from ugly stuff in the South to snow, ice, and sleet in the North. And, though the weather won’t be that cold, at some point, you will have to clean off the windshield of your car.

Typically, clearing the windshield is straightforward. Usually, it’s nothing more than turning your vehicle over and letting it warm up a bit – with the tailpipe clear, of course – while you are moving snow off the windshield with a snow broom or a snow/ice scraper. The same is true of the side windows and the backlight, also known as the rear window.

Proper snow-clearing requires patience, supplies of which stretch paper-thin as you continue to work to clean the snow and, possibly ice, off your vehicle. Instead of waiting until things begin to melt gently, there’s the tendency to jump all over the snow-clearing to “get it done.”

That is the wrong strategy if you want your windshield and, potentially, other windows to survive snow-removal. What is crazy about trying to hurry things along? Let’s see; if you do something wrong, you might end up blowing out your windshield – it doesn’t take much. If your ice encases your vehicle, you might also end up blowing out a side window or the backlight. You may even end up fouling up the vehicle’s doorlocks if you try to do things too quickly. And, finally, if snow and ice cover your car, you could end up marring the finish if you scrape it as you try to clear it using a shovel or hard scraper.

Removing Snow Requires ‘Slow Down To Hurry Up’

So, how should you handle this situation? In this case, the old saying “slow down to hurry up” can easily be applied. By taking a few extra minutes to warm up your vehicle correctly, you can save yourself untold hours of grief. (Neighbors of ours tried to hurry things along with last winter and the result rather horrific. By lighting off the heater and working to circulate the coolant to heat things more quickly, they managed to get something a tad too hot. As a result, they ended up heating the windows too fast – the windshield defroster was weak – and they lost the driver’s side windows front and rear, one of which is still not completely fixed.)

If they had just started up their car and walked away as it began to heat – we have protected parking as we are off the street and behind a massive forest so you can walk away and come back; we are also on a hill with only one drive and path up, so people see things and let you know if there is something wrong – they would still have their windows intact.

Yes, it’s apocryphal, but it nonetheless happened. As noted, a bit of patience would have worked wonders.

And, now we come to the reason for this story, it’s a guaranteed way to clear the snow and ice from your windshield by taking your time. It’s a multi-step process that Torque News will list for you. The assumption is this: your area has had either a snowstorm or snow and ice storm for the last 24 hours, and you have gone out to clean your car once the precip has slowed or stopped. The other assumption is that it will remain cold for a few days following the storm, so you need to take care of the issue before it freezes solid. The basis for these steps comes from years of work clearing dealership cars during snowy New England winters.

So, here’s the best way to clean your car, without breaking a thing (unless a branch falls on it):

Honestly, it takes many more words to describe the process than it does to implement it. Be sure, though, that if the ice or snow isn’t moving that you go inside the passenger compartment and turn up the defroster. If you do things correctly, though, you won’t have to turn it up to levels that will cook eggs. A couple of points on the dial should do it. The reason is that you have already heated the windshield; you only need a bit more.

This procedure covers it. If you follow the steps carefully, you will find you have an easier time cleaning your vehicle, and it will be quicker, too.