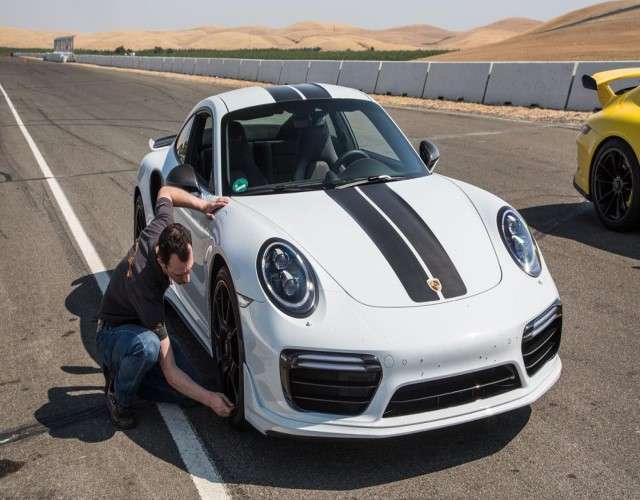 With a top-end of 205 mph and 0 to 60 time of 2.8 seconds, the Porsche 911 Turbo S needs top wheels to handle the stress of speeding through turns and corners. To handle this chore, the automaker is manufacturing special carbon fiber wheels.
Advertisement

Lately, there has been a lot of excitement from Porsche. Porsche is super-excited about its 911 Turbo S, a limited edition that offers supercar performance. Part of the Exclusive Manufacture program, the 607-horsepower Turbo S offers 0 to 60 performance in the 2.8-second range. Porsche Gives 911 Turbo S Hypercar Power.

Perhaps it is the favorable power-to-weight ratio or the weight of the car, but whatever the reason the Turbo S blurs the line between supercar and hypercar. Indeed, if you observe the speedo while you are behind the wheel, you will find that you’ve crossed 124 mph in 9.6 seconds.

With a top-end of 205 mph, the limited-edition series – 500 -- is quite at home either on the track or the public roads. However, you can’t push the Turbo S to its limits on a local expressway as there might be an imperfection or 17 in the road surface which could launch the $205,000 supercar into oblivion or a bridge abutment (not a good ending).

The 3.8-liter twin-turbo flat six is a proven engine having been developed and tweaked for the last four decades. The six drives a seven-speed, dual-clutch automatic that, in turn, pushes power to the wheels. With whip-quick reflexes, the nimble AWD supercar holds any line you take through turns and corners.

Without capable wheels and tires at the corners of the Turbo S, none of this would be possible, even with the AWD system. So, Porsche has cooked up a unique set of wheels to help things out. The automaker uses four carbon fiber wheels front and rear. Porsche makes these wheels, using a radial loom wheel to do it. It takes about a total of about 5.5 miles of material to make the base. That’s not all, as the process adds more applied to the base. At this point, the wheels are something like picture puzzles, as the automaker must piece together about 200 bits into the final form. It puts them in a special “oven” where the wheels baked, turning them into wheels. The Turbo S uses 20-inch wheels in the rear and 11.8-inch wheels at the front. Porsche Cooks Up Special 911 Turbo S Tires.

You might think that when the wheels finish baking, they are ready to go but you would be wrong. Powerful machines push the wheels to their limits limit for more than 1.4 million miles of driving, Porsche knows the wheels will stand up. This testing is in addition to more than 4,500 laps on the test track.

It also means the Turbo S has super-strong and lightweight wheels at the corners. The wheels are 20 percent lighter and stronger than the forged alloy aluminum wheels they replace. Wheels like these don’t come inexpensively. They add $18,000 to the cost of the top-of-the-line Exclusive Series Turbo S.