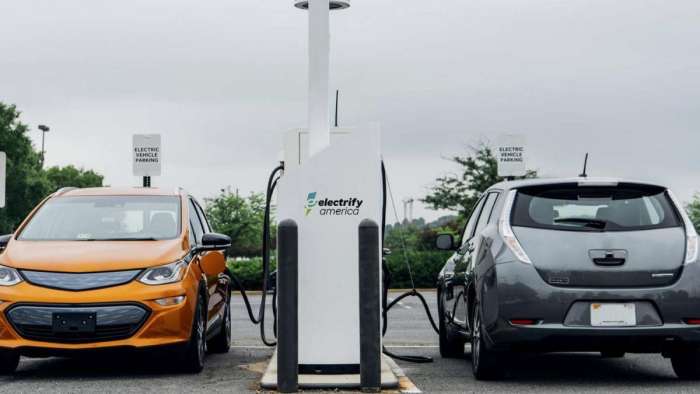 Electrify America, the Volkswagen subsidiary charged with expanding or creating more zero emissions infrastructure, has been awarded Popular Science 'Best of What's New" for 2018. Specifically, PopSci called out EA's high-speed charging stations and the special tech. that they use.
Advertisement

Popular Science has named Electrify America’s electric vehicle (EV) charging system winner of the publication’s “Best of What’s New” for 2018. Electrify America is the Volkswagen subsidiary that was set up in the wake of the Dieselgate scandal to work on a $2 billion infrastructure piece of the settlement.

The settlement included, among other things, expanding the infrastructure for electric cars (Zero Emission Vehicles). Electrify America’s investment includes not only charging stations but also education programs for those who access the system. Ultimately, Electrify America will have a nationwide DC fast-charge network in 16 metro areas and along high-traffic corridors in 32 states, including two cross-country routes.

Meanwhile, Popular Science, every year reviews thousands of new products and innovations. The magazine’s editors then winnow the number of possible candidates to the 100 winners in 10 categories. Winners are products that represent a significant advancement in its class.

Focusing on both the future and today, Electrify America’s charging systems have a range of power from 50 kilowatts (kW), the most commonly used charging system for EVs today, up to 350 kW, which is capable of giving charging vehicles range boosts of up to 20 miles per minute.

Joe Brown, the magazine’s editor-in-chief, said that the awards allow the magazine to “examine and honor the best innovations of the year. This collection shapes our future” while having “ … some fun along the way.”

Items From Simple To Complex

He continued that the magazine is “proud to bring you the Best of What’s New 2018.” The items range of items ranges from simple household items to massive space-exploration tools.

Electrify America’s chargers have been custom-designed. There are several advanced features, including liquid-cooled cables. This is the first time that liquid-cooled CCS1 charging cables have received certification for a 150/350 kW DC Fast Charger. The key to fast-charging is cooling. Cooling is the critical factor in enabling higher-amperage charging without a significant increase in the cable thickness for charging power at and above 150 kW from 350 amps.

With a much smaller cable cross-section than the traditional high-powered cable option, these cooled cables are thinner, more flexible, lighter and easier for consumers to handle than the standard 350A capable copper cables when charging their EV.

“As a brand-new company, our team has focused on the customer since day one. Our goal is to develop and offer future-proof technologies that are easy to use so that we can help expand EV adoption in the U.S.,” said Giovanni Palazzo, president, and chief operating officer of Electrify America. “We are thrilled to have the Electrify America charging system honored” with the “Best of What’s New by Popular Science.”

Electrify America's charging systems feature a CHAdeMO (50 kW) connector. Also, there are extra dual-handled chargers with CCS (50 to 150 kW or 350 kW) connectors that ensure fast-charging to fast-charge capable vehicles that use Electrify America stations. Electrify America DC Fast Chargers, ranging from 50 to 150 kW, are available in urban locations. Each metro fast-charge system also offers an L2 AC charger to accommodate plug-in hybrids and non-DC-Charge-capable EVs. Highway locations will feature four to 10 chargers with the CCS1 connector, while metro charging stations will have three to six.