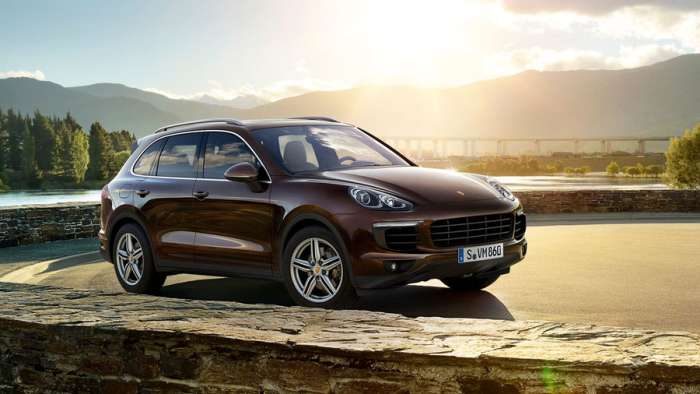 Once Fix Is Set, Porsche Will Fix Diesel Cayennes, Sell Them As Used

Once the court approves a proposed fix for 3.0-liter V-6 diesels involved in Volkswagen's emissions scamming scandal, Porsche will fix up to 1,500 brand-new Cayennes that have been frozen on dealer lots and offer the crossovers for sale as super used-cars.
Advertisement

If you can wait, and don’t mind buying a vehicle that has been sitting around for more than a year because it has been tied up in the Dieselgate scandal, then you may be in luck soon as Porsche plans to sell the 1,500 crossover Cayennes as used cars. In reality, they are new cars, but, they have been on a sales-hold for more than a year as the automaker sought to find a fix that was acceptable to regulators and the courts.

Recent reports say that regulators have reportedly given their blessing a fix proposed by Volkswagen for the 3.0-liter V-6 engines that were part of the Dieselgate emissions scandal. According to a Bloomberg report at mid-month, the Environmental Protection Agency (EPA), and California Air Resources Board (CARB) have reportedly given their blessings to a fix proposed by Volkswagen. Now, all that remains is court approval of the proposed fix.

Klaus Zellmer, chief executive of Porsche North America, told Automotive News recently that, presuming a fix is finally okayed by the court, the automaker plans to implement that repair, fix the crossovers and then sell them as premium used cars.

Interestingly, the crossovers are, with the exception of the emissions problems that will be rectified, brand-new. They were placed in sales stop mode when the Dieselgate scandal broke in September 2015. The 1,500 Cayennes were on dealer lots when the emissions scandal hit and they had been parked there ever since.

At the moment, Porsche is waiting on court approval of the fix that was approved by regulators earlier this month. Bloomberg reported at mid-month that Volkswagen and U.S. regulators had reached an agreement on how to handle the 80,000 3.0-liter V-6 diesels that were also part of the Dieselgate scandal. The court handling the case must approve the arrangements.

Zellmer could not comment on the specifics of the settlement. However, he did indicate that once a plan is approved, Porsche will fix 10,000 Cayenne diesels that are in customer hands, as well as the 1,500 Cayennes that are still in dealer inventory. A stop-sale order was placed on 2014-16 model year diesel Cayennes on Nov. 3, 2015.

Zellmer talked with Automotive News during the recent Los Angeles Auto Show. He believed that the Cayennes should be attractive to diehard Porsche diesel aficionados. Once the Cayennes are fixed, “they are going to be sold as used cars. They will be low-mileage, very attractive used cars, based on the age of the car. There’s always a market for any car. You just have to get the price right.”

The automaker did manage to keep some Cayennes that were earmarked for the U.S. from making it here, however, there were a number that slipped through and either ended up at various ports, awaiting an outcome or on dealer lots. “We don’t have to fix those [Cayennes that stayed in Germany]. So we’re actually in pretty good shape. Once we have the tactical fix, we’re rather confident,” Zellmer said.