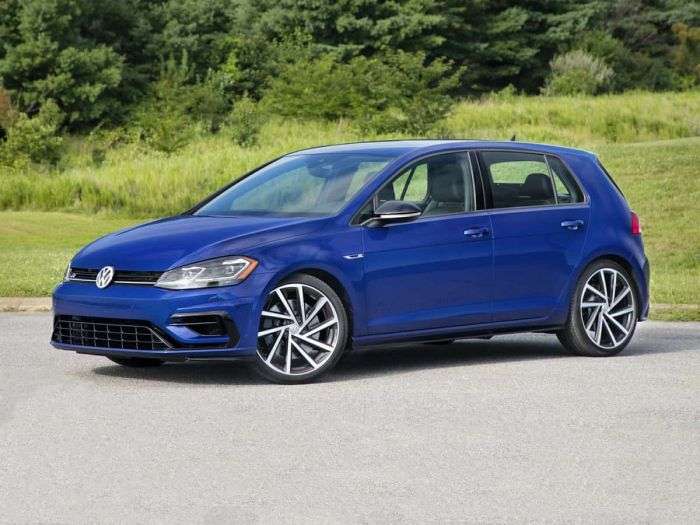 There was an interesting report today that is making the rounds regarding the 2019 VW Golf. It is reportedly going to be the most powerful hatchback at 400 HP in VW history.
Advertisement

As Volkswagen goes through the paces of creating, testing and refining the next generation Golf family (eight), due out next year, there are already rumors swirling about the yet-to-be-seen lineup that are very tasty.

Drivers Will Be Satisfied With The VW Golf R, No Doubt

The biggest rumor – at least the one that will satisfy gearheads from Tacoma to Wolfsburg (and on into China, perhaps) – is that one version of the Golf R hatch will be the hottest hatch version in the automaker’s history. VW putting new touches on 2019 Golf R.

The rumor was first brought up in a report this week in Auto Express. It suggests that the hardcore racer Golf R hot hatch – reportedly the hottest and most extreme Golf in history – will be a mild hybrid, using the automaker’s 48-volt mild-hybrid system. The Golf R will be built as part of VW’s $2.2 billion investment in the eighth generation Golf family lineup.

According to the publication, Volkswagen is already in the prototype testing phase on the roads around Wolfsburg, Germany. Volkswagen's seen on roads near Wolfsburg, Germany. They had better be well along in testing right now as the automaker is planning to put the Golf R and others into production in June 2019.

VW has been quite tight-lipped about the new model line, including VW’s extreme hatch, the Golf R. However, that does not mean we don’t have one or two nuggets to share. According to our information, the new fire-breathing hatchback is supposed to have 400 horsepower under the bonnet (as the Brits say). Since the models use a mild-hybrid system. VW has been able to squeeze a vicious amount of power out of their system – 400 horsepower or 298 kW.

Jurgen Stackmann, VW (the brand) sales, and marketing chief confirmed the horsepower numbers but kept any details of the powertrain out of the conversation. Auto Express, meantime, thinks the revamped monster Golf will use the same mechanical layout that is used in Golfs today.

In other words, the standard powerplant will be a turbocharged, 2.0-liter inline four. The Golf will send the power to all four wheels, using VW’s trademarked 4Motion AWD system. Speculation about the transmission is that it will be a dual-clutch seven-speed automatic.

The turbocharged four and mild-hybrid technology work in tandem so that one supports the other during hard acceleration. Another advantage of this system is that it helps improve fuel consumption numbers.

One thing that VW’s engineering department likes to do now is ensuring that all pieces of a design work in unison. For example, with the increased power, the aggressive Golf R will mount quad tailpipes, use more lightweight design material like carbon fiber, and the Golf R will mount large air intakes in the front bumpers that will ensure that the Golf R’s styling remains unique from standard versions of the Golf.

“With as little more expressive design, R can go beyond the rational side of things,” Stackmann said. “It [the R brand] can find its place in a different league of pure performance and there’s a space where customers are willing to pay a significant amount of money.”