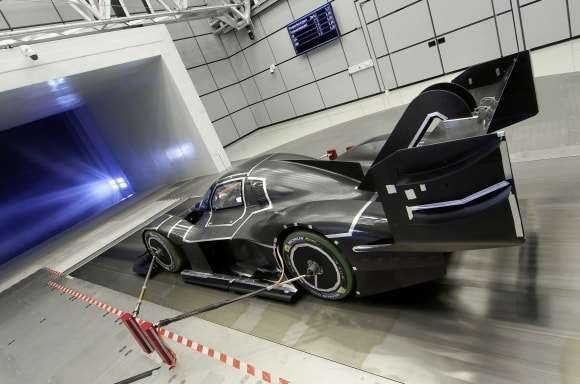 VW ID R: It takes a lot of work to ready a new racer for an old race

Though you probably have guessed it, it does take a lot of work to get a race car ready for a race that hasn't run yet. If you are wondering, here are some of the details of the VW ID R.
Advertisement

Think about this for a moment: do you know how much work goes into getting a brand-new race car ready for its racing series? If you answered a lot of work, then you are right. Now, this question may seem like an oxymoron, after all, it stands to reason that new race cars need lots of hard work to get them ready. However, when the “racing series” consists of one run, you can also be excused if you say: “What the?...”

VW's getting the kinks out of the racer

But, that’s what is going on right now at Volkswagen as it works to get the final kinks out of its I.D. R Pikes Peak. For Volkswagen, it is quite an exercise because the I.D. R Pikes Peak is VW’s first fully-electric racing vehicle. VW developed the sleek single-seater to take on the 12.4-mile Pikes Peak International Hill Climb 2018. Like as not, the I.D. R Pikes Peak will remain central to VW’s Motorsports effort as the automaker moves to change its primary orientation from internal combustion engines (ICE) to electric. That it is a key to VW’s future can also be inferred from its inclusion in the I.D. family of vehicles. The I.D. identifier covers Volkswagen’s first complete family of full electrics. It will include a hatchback, due for introduction 2019; a multipurpose vehicle (MPV) the I.D. Buzz, due in 2020; the I.D. Crozz, a crossover, due in 2021, and a full SUV, due in 2022.

What else, though, does VW hope to achieve with the new race car? Its stated goal is to take on and break the class record for electric prototypes. Currently, the record stands at 8:57.118 minutes. To break this record, VW has some fancy traveling to do. “The start line is located at an altitude just above 9,000 feet, with the finish at 14,115 feet above sea level. The low air pressure up there means that the aerodynamic conditions are different to those at a racetrack on flat land, says Francois-Xavier Demaison, technical director of VW Motorsport. He is also the project manager.

One of the more exciting -- and useful -- pieces in the final development of the I.D. R is the fact that the race features relatively open regulations which give engineers more leeway in developing the chassis and rear wing of the vehicle. For example, during the 12.4-mile race to the summit, top speeds are relatively tame at 155 mph. It is because the turns and corners are such that the development team had to assure there was more than enough downforce to keep the I.D. R Pikes Peak stable and optimal cornering speeds. “The entire chassis is designed to generate as much downforce as possible, without causing too much aerodynamic drag,” Demaison explained.

The result is that the I.D. R Pikes Peak is visually striking as the rear wing is oversized so that it will generate the type of downforce needed in the rarefied air of the mountain top race venue. “The altitude on Pikes peak means that the air we are driving through is on average 35 percent thinner. As a result, we lose 35 percent of our downforce, compared to a racetrack at sea level. The huge rear wing allows us to compensate for some of this ost downforce” according to Willy Rampf, technical consultant to the project. Rampf has years of experience with Formula 1 racing. “The imaginative aerodynamic development means that we will still achieve maximum downforce great than the weight of the car during the hill climb.”

As part of the development of the I.D. R Pikes Peak, the engineering team looked at and engineered the aerodynamics of the race car to tackle the world’s most famous hill climb. They used a half-scale model to test many sets of variants in a wind tunnel, finally installing them on a full-sized chassis. Next, the chassis was put through testing on the rolling-road wind tunnel at the Porsche development center in Weissach, Germany. “It was greatly beneficial to be able to use the resources from within the [Volkswagen] Group,” Demaison confirmed.

To remain on a tight timeline the engineering team often produced parts on a 3D printer. “We printed about 2,000 parts. In doing so, we saved a lot of time,” said Dr. Herve Dechipre, a VW Motorsport engineer, with responsibility for the aerodynamics of the race car.

Electric cars have their advantages

Because the I.D. R Pikes Peak is a full electric, it avoids the cooling issues faced by ICE vehicles. It made it possible for VW to reduce the size of the chassis intakes, traditionally aerodynamic drawbacks. However, the thin air on the course also hurts the efficiency of the cooling. To find compromises, VW engineers run simulation software. “We could not manage this solely with the data from the wind tunnel, where it is not possible to recreate the thin air. The simulation was a great help in determining the dimensions required for the cooling system,” Demaison said.

Meantime, there is a test run planned on the route at the end of the month. Romain Dumas, three-time Hill Climb winner, also tapped for the main event, will be at the wheel.