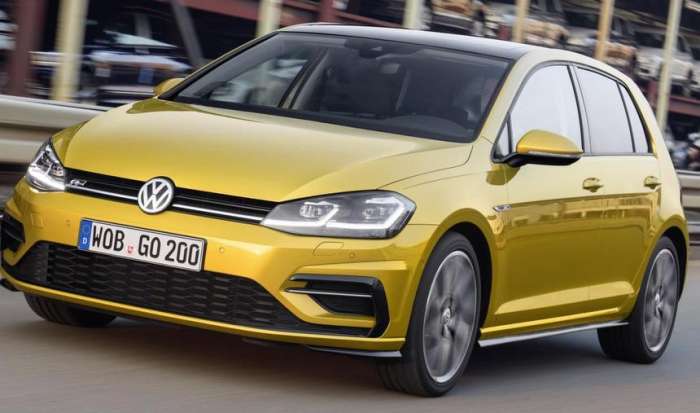 Here Is A Look At Volkswagen’s 2018 Golf

Volkswagen this week gave the press a look at the 2018 Golf. The Golf line is VW's biggest-seller and is important from a sales standpoint. Since the current generation debuted in 2012, 3.2 million Golfs have been sold.
Advertisement

Watching the information that has appeared lately on 2017 and 2018 models you’d think that the only concern consumers have is the infotainment system that will grace the center console area of their new purchase or lease. Yes, information on things like engines, transmissions does appear in articles about future vehicles, but, it is buried somewhere at the bottom, just where you cut a story that runs too long.

Why is this an accurate statement? It is simple. It is the way the world has come to operate in 2016. Rather than dealing with the important – at least from this vantage point – items like engine size and output, as well as transmission and other drivetrain elements, many people just take the easy way out and go right for the toys. This isn’t to say that toys aren’t important in cars because they are. Without them, long trips would certainly be very dull and finding out-of-the-way places would be harder-than-necessary. However, car enthusiasts are more than just electronics consumers; they want to know things like horsepower rating; torque and the like.

With this all said, one of the important upcoming vehicle updates for Volkswagen is the 2018 Golf. The hatchback series is VW’s best seller. It will be entering its eighth generation in 2018, coming off a successful run that features 3.2 million vehicles in sales. The seventh-generation Golf was introduced in 2012.

For Torque News readers, the important news is engine and transmission improvements. The 2018 VW Golf features exciting engine changes, as well as a transmission tweak. There is new base powerplant, a 1.5-liter turbocharged four. The new mill features:

Usually, sailing or auto-shutdown is a stop-and-go or slow-speed feature found on hybrids. When the speed drops below about 20 mph, the engine goes offline, and the Golf continues rolling. Sailing saves gasoline and cut emissions. With the engine shut off, power is maintained to systems like steering and brakes by an auxiliary 12-volt battery.

There have been some other design tweaks that have enabled VW to increase the power output of the small four. By using early intake valve closure, the engineering team employed higher compression ratios that increased power output. Other significant powerteam changes include a variable geometry turbo and cylinder deactivation (selectively turning off cylinders to assist with mileage).

The four-cylinder powerplant mates to a seven-speed, dual-clutch automatic that features paddle technology.

There have been changes on the GTI front. The base GTI features a power increase from 210 to 227 horsepower while the optional, higher-level Performance Package sees the power jump from 220 to 242 horsepower.

The 2018 Golf features some subtle styling changes. For example, the front and rear bumpers have been restyled slightly, while the headlights wrap more fully into the left and right front fenders. LED taillights are standard on all models. LED headlights are also standard.

The interior features more display integration. Three touchscreen displays, ranging from 6.9 to 9.2 inches, are available. The touchscreens integrate many of the buttons that used to festoon the instrument panel. There’s an available digital recognition package that lets you clear the screen and access items like radio station lists and entertainment tracks with a slow swipe of your hand.

The 2018 Golf has an extensive suite of safety technology that includes: