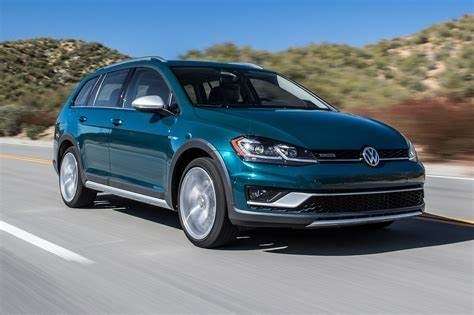 Volkswagen’s Golf Alltrack has received high praise from the New England Motor Press Assn. (NEMPA) as the automaker’s product was named the “Best In Class, Sedan/Wagon,” in the organization’s awards May meeting.

It’s Easy To See Why The Award Was Made

It is easy to see why the Golf Alltrack received the award. It features unique technology that not only makes it a fun car to drive but also a somewhat unique vehicle. For instance, the Golf Alltrack employs VW’s 4Motion® all-wheel-drive system. The all-wheel-drive system has been around for years. During that time, VW engineering added changes and improvements that were under the skin, while keeping the body line alone.

The 4Motion® all-wheel-drive system not only delivers excellent traction; it also yields directional stability to the Golf Alltrack. The 4Motion® system works from the time you start up until you turn it off. The system normally sends the power to the front wheels in daily driving. As the system senses changes in the traction demands of the vehicle, it begins to route from the front wheels to the rear wheels. And, if the 4Motion® system, an example of intelligent all-wheel-drive, a sense that the right rear wheel needs more torque, while the left needs less, the amount of power delivered to those wheels is adjusted automatically.

Though most people associate off-roading with crossovers and SUVs, the Golf Alltrack, a very nicely proportioned station wagon, has a feature that some SUV manufacturers would love to have in their repertoire, Hill Descent Control. The way this particular safety feature works is that when the Alltrack is in Off-Road Mode, the active Hill Descent Control continually controls applying the brakes automatically so that the ride down the steepest inclines remains at a safe, constant speed. Who says you need a crossover or SUV to have this feature? Honestly, you don’t need the more expensive SUV-style vehicle to have the same features plus items like Hill Descent Control. Indeed, it’s a savings of thousands as the suggested retail price of the Alltrack is $26,895. Normally, a full-blown crossover or SUV will have starting prices in the low-$30s.

You may be wondering why Volkswagen planners decided about 18 months ago to shift the Alltrack vehicle from the Jetta to the Golf lineup. Frankly, it looks as if it is simply a matter of design. Jetta is now a one-vehicle lineup, a sporty sedan. Somehow, it just doesn’t seem right to offer the Alltrack designation on a vehicle that doesn’t even pretend to be more than it isn’t. It’s a sedan, and that’s it. So, enter the Golf Alltrack, a nicely designed vehicle.

The Lines Are Proportionate And Nicely Done

Looking at the lines closely, you will see that the line rises from a narrow, two-stage front end where the headlights quite nicely fare into the design. If you look closely, you will see that the headlights are quite harmonious inclusions in the styling that rises through a sloping roof and windshield. The body is nicely proportioned, as well as it moves from the narrow front end into its normal size by using the front fenders to tie those elements together.

Once away from the A-Pillar and windshield, the roofline rises a bit until about the B-pillar where it begins a gentle downward slope to the C-Pillar (rear) and a very nicely put together piece that combines the taillights and hatchback that is well done.

With a slew of safety technology and the latest entertainment technology, the Alltrack is a vehicle that should go places. Only time will tell if this happens.

Much Of The Reason That The AllTrack Made The Grade

This is probably 98 percent of the reason that NEMPA chose the Golf Allroad as its Best-in-Class finisher.