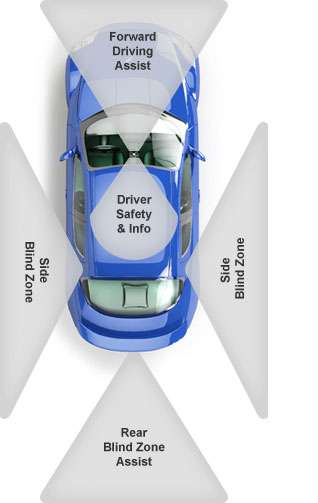 Gentex, a leading manufacturer of rearview mirror display systems, believes that there will be a demand for systems that combine conventional and electronic technologies into hybrid systems.
Advertisement

The next time you get behind the wheel take a look around and think of some of the items that are easy to take for granted. For example, when was the last time you actively thought about the speedometer? Or, how about the heater controls, when did you last think about them, other than to set them on a cold morning, of course? How about the rearview, when was the last time that it became an active part of a thought process?

Looking at the array of concepts that are out there, it seems as if the auto business has not only taken the rearview for granted, but it has also moved them out of the picture. Instead, manufacturers are fooling around with rear-facing camera systems that display video somewhere on the dash, while others are working on systems that flash video to a central dash screen when your vehicle is turning.

Mirrors Have A Future

Gentex, on the other hand, a major maker of auto-dimming mirror systems, believes mirrors have a future. Last month, for example, the company showed a smaller side mirror that is fitted with a camera. The hybrid mirror lets drivers look for the mirror they expect or for video if they choose.

“There are things that buyers expect to see in a car,” Steve Downing, company chief exec, told Automotive News. “We give them an option.”

Another option takes the input from three cameras, stitches it together and displays it on the rearview, in place of the conventional mirror. The three-camera output cuts out C-pillar-caused blind spots. Interestingly, the smaller sideviews are half the size of current mirrors. They offer a weight advantage over conventional mirrors, as well.

Though it is now unclear just how many automakers will use the hybrid-style sideviews, Caddy’s CT6 and XT5 feature them, as does Chevy’s Bolt. The systems offer drivers current views or drivers can take the three video feeds and use them as an integrated video-driven rearview.

Still, manufacturers would probably like to get rid of the sideview mirrors altogether due to weight issues, as well as to improve drag and cut costs.

Three years ago, the trade paper said over the weekend, Tesla and the Alliance of Auto Manufacturers asked the National Highway Traffic Safety Administration (NHTSA) to let video cameras substitute for sideview mirrors. Since there has been no ruling yet, the automakers have been taking their matters into their hands by employing hybrid systems.

In 2013, for example, Honda introduced the LaneWatch system. Installed in an Accord, the system activates and a camera mounted on the right-hand mirror feeds video to the console. In use, some drivers found it distracting, so Honda introduced standard blindspot and turn vision systems.

Downing believes that drivers find it more intuitive to look at the rearview for a rear display, as used by Cadillac. However, others are trying other ideas.

Continental has created side cameras which feed images to small display screens at the A-pillar. The theory is that this placement should allow the elimination of mirrors without upsetting drivers.

Though Gentex has yet to land put any contracts for its hybrid sideviews, Downing sees the product catering to the conservatism of many drivers. “Consumers appreciate evolution rather than revolution,” he concluded.
Source: Automotive News