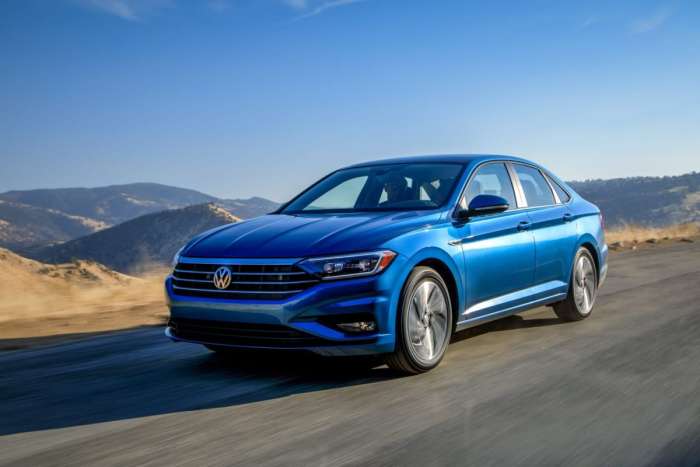 Though you would think an electric version or a hybrid model VW Jetta would be in the running for the "Green Car of the Year," you would be wrong. The turbocharged version of the seventh-generation Jetta has been name a finalist in the competition.
Advertisement

When the seventh-gen Jetta appeared earlier this year, it looked like VW might have a winner. Now, it seems the belief is coming true because the VW subcompact is in the running for the “Green Car of the Year®” award.

The award from the Green Car Journal honors the vehicle that enhances its environmental performance while “remaining within reach of most consumers.” Ron Cogan, editor, and publisher of the print and online versions of the Journal said that the finalists in the 2019 competition “illustrate that ‘green’ comes in many forms.” The gas-driven turbocharged Jetta shows that not just electrics or hybrids make the grade.

VW’s ubiquitous MQB platform underpins the seventh-generation Jetta, which debuted at the start of the model year. The new model, whose design is fresh and which features lots of interior space, is loaded with technology. Interestingly, the Jetta’s fuel economy figures include an EPA-estimated 40 highway mpg rating. Typically, a highway rating like 40 mpg means the vehicle uses a hybrid powertrain. However, in this case, the mileage is delivered by the Jetta’s 1.4-liter turbo gas engine. The “finalists for 2019 Green Car of the Year® illustrate that ‘green’ comes in many forms,” Cogan continued.

“We’re so pleased to be selected as a finalist for the Green Car of the Year award,” Derrick Hatami said. The VW executive VP for sales, marketing, and after-sales said that the choice of the Jetta for the award “further validates the Jetta as an exceptionally competitive offering in the compact sedan segment, where efficiency” is a top consideration.

The EA211 engine (internal designation) uses an air-to-water heat exchanger built directly into the intake module in place of the intercooler. The exhaust manifold is integrated into the head, reducing the distance exhaust gases have to travel to reach the turbocharger, so the response is quicker while the catalyst lights off quickly, as well.

Valves work to regulate coolant flow into the head, which allows for rapid engine heating, as well as efficient cooling when the engine reaches operating temperature. Both the intake and the exhaust valves feature variable valve timing. The result is improved low-rpm performance, as well as increased torque throughout the range of the engine. The engine’s compression is a relatively high 10:1 which increases efficiency, yet, the engine still uses regular – 87 octane – gas.

Although the Jetta is more technologically advanced than ever, it still retains its fun-to-drive character. Through turns and corners, the Jetta holds any line you choose. There is a lightness to the handling that has continued from earlier generations. The standard six-speed manual retains its short positive throws. Indeed, the manual transmission has always been a delight to use. For those who don’t want to shift for themselves, there’s an eight-speed automatic available.

A Stop/Start system is standard on automatic transmission models. This technology stops the engine during idle when the driver depresses the brake pedal, such as when waiting at a red light; and, when the brake pedal is released the engine restarts.

Since its inception in 2006, editors of the Green Car Journal and invited jurors have chosen the Green Car of the Year. The jurors come from respect efficiency and environmental organizations.