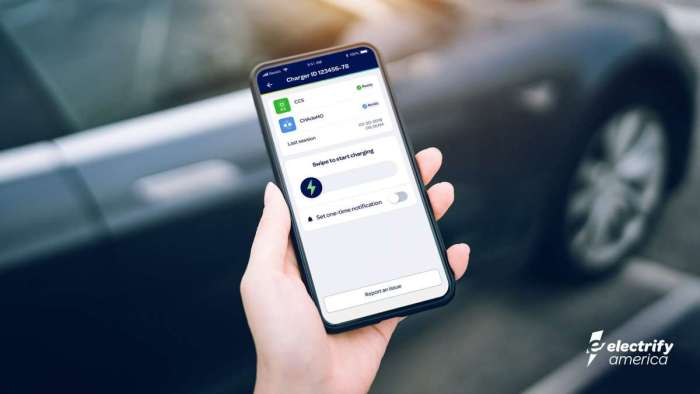 Electrify America, the EV charging utility created in the wake of the Dieselgate scandal, has introduced a new, easy-to-use charging app that not only tells you where available charging stations are located, but also which ones are in use.
Advertisement

One of the many questions that prospective owners of electric vehicles (EV) ask is “where can I charge it?” This is usually followed by “how much will it cost?” And, then there are questions about how you pay for it, as well.

Electrify America, a subsidiary of Volkswagen launched as part of its commitment to zero emissions vehicles following the Dieselgate scandal, has an answer, a new mobile app that allows users to manage the charging sessions on their smartphones.

Giovanni Pallazzo, president, and CEO of the EV utility said that the service is “committed to increasing EV adoption and are constantly innovating to make the charging experience as a convenience and accessible as possible.” He said the new app will “put all the information and capabilities you need to charge your EV right now in your pocket, making charging with us easier than ever.” He concluded that the new app, “combined with our membership plans, we are streamlining the charging experience at our ultra-fast chargers.”

According to Electrify America, the new mobile app allows you to:

Along with the charging app, Electrify America has introduced two membership plans which go into effect later this month. They are:

Electrify America charges by the minute. To accommodate various vehicles, the company has a new pricing plan as it plans for vehicles that can charge at 50 to 150kW rates and then up to 350kW. Each charge session is dependent on the power level at which the EV is charging, plus the location of the charger. The power tiers are: 0 – 75 kW; 76 to 125 kW, and 126 to 350 kW.

For complete information, please see the Electrify America website.. An update is planned later this month when the new pricing structure is in place. Also, the new app and membership plans will also be released later this month.

Marc Stern is a reporter for Torque News who covers the Volkswagen companies and other issues. You can follow him at Facebook or on Twitter. He has known to dabble a bit with Amateur Radio.
Source: Electrify America