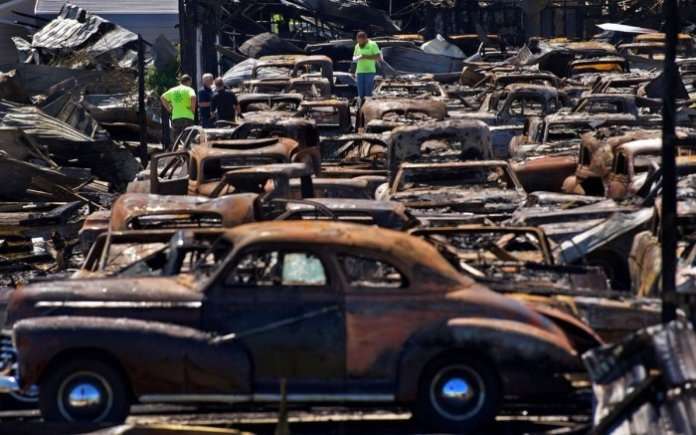 An Illinois classic car dealer, whose vehicles have also have appeared in videos for the last two decades, suffered millions in damages Tuesday night as a fire destroyed 150 classic and antique cars. Russ Noel, who turned to classic cars two decades ago, also found that though he lost the vehicles he also found that many people cared as much about them as he did.
Advertisement

How many times in the last few years have you watched a video that was set somewhere in the last century, somewhere in the country and that featured primo cars of that era? If you are like most TV-watchers, the answer is, and it’s probably a safe bet, that the number is many. If you are a car enthusiast, the chances are good that you paid a good deal of attention to the Detroit iron that lined the streets of the scenes shot on location or sound stages, just to make sure everything was on the up and up.

Provided Vehicles To Many Productions

As the years have gone one, of course, it has become tougher to find vehicles in good shape that matched the ones needed by the video’s producers. So, that is where Country Classic Cars came into the picture. Founded nearly 20 years ago by Russ Noel, the huge classic car lot boasted vehicles that dated as far back as the 1920s. There were hundreds of them.

On Tuesday night, 150 vehicles housed in the main showroom area of the classic car dealership went up in flames and in a massive fire that lasted three hours. The fire, which drew 50 or so residents of Staunton, Ill. is likely to cost millions.

In what must have been a labor of love, Noel launched his showroom and dealership near a piece of the iconic American tarmac, Route 66. He built it to the point where it consists not only of the main showroom, lot, and dealership but also of four other lots, each of which contained its share of classic cars. Standing near his fire-blackened, crumpled office with its rows of destroyed vehicles, Noel talked with a reporter. “They just don’t make them like that anymore,” he said, wiping his eyes.

Though he lost a sizable portion of his stock, Noel had planned to be back in business by Thursday with the several hundred vehicles that remained. “I think we’re going to open again tomorrow,” he said. “It’s no hill for a climber.”

Business Stretches Around The World

Noel’s classic car business stretches around the world. He has shipped cars as far away as Hawaii, Sweden, and Switzerland. His inventory usually stands at about 650 vehicles, so he does have the cars he needs to keep on going. On an average month, he sells between 35 and 40 cars.

Country Class Cars are the type of business that brings enthusiasts from everywhere. Folks come there to dream a bit or, perhaps, if they had the funds, buy something. His customers also include many people from his area, as well. They felt the loss as deeply as did Noel and his wife, Anita.

Indeed, many locals arrived during the day with offers of help, some swapping stories about their visits to the dealership. Troy Puckett, a nearby resident, said that the fire “almost makes me want to cry. You can’t get those cars back. I would just walk around the place and dream.” A local teen, Dakota Stanger, who had visited the dealership many times since he was a three-year-old, told a reporter that he “lost sleep when I heard. I almost couldn’t look at a car this morning.”

Investigators were still seeking the cause of the fire. They believe the fire began in the center of the main building and spread outward. Noel received word of the fire about 8 p.m. Tuesday and rushed to the scene to find flames filling the sky. Images of the fire also appeared on social media.

’It Was Hard To Watch’

“It was hard to watch,” Noel said, indicating he was trying to remain positive. He also hoped to recover some of his loss through insurance.

Mostly, though, he is grateful the blaze didn’t spread to his other four showrooms. He also looked around at the folks who were visiting his car lot and said he appreciates the people who care about the business he has built. “I never knew I had this many friends until today,” he said.