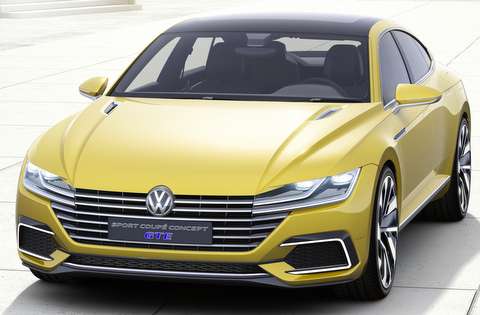 A group of auto spies recently reported a sighting of the 2018 Volkswagen CC. The CC is based on the MQB platform, used by Passat, and is helping to extend VW's plans for the expansion of the architecture.
Advertisement

Another vehicle was spotted in the wilds of Germany recently making a run for it – at the Nurburgring, of course, where else? It was a Volkswagen, and it may be the next CC. Based on the MQB architecture that was seen first on the 2016 Passat, the CC that was spotted by some sharp-eyed auto spies had a lot in common with the with a concept car that was shown by VW at the 2015 Geneva International Auto Show.

The CC that was at the Nurburgring, Volkswagen’s test facility, featured some exciting developments. For example, the front end is more aggressive. The headlamp pods are dual-LED units, very similar to the ones that were shown on the Geneva concept car.

The spies, who made their initial reports to Autoblog, also indicated that the windows were somewhat smaller than the former CC. And, they said that from its stance, the new sedan would likely be lower, wider and lower than previous models. One visual trick the design team used was keeping the CC’s sloped roofline. By using the sloped roofline, the designers were able to maintain a sleek profile. It also enabled the designers to make the design a four-door coupe-style vehicle.

Moving to the rear, the spy team found that the taillights imitate Audi’s current design. The taillights are also more modern than the former model.

Interestingly, the 2015 Sport Coupe concept envisioned a liftgate, instead of a trunk. It is likely, given the word that is circulating, that the new CC will inherit the liftgate. The spies noted that they couldn’t verify that report because of the heavy camouflage on the rear. Given the massive size of the masking, they couldn’t figure out whether the rear would have a trunk or a liftgate.

Since the CC will share the same platform at the Passat, it is likely that the new model will use the same powertrain as the current Passat. There may also be a wagon variant in the works. The CC will likely debut at one of the major 2017 auto shows.