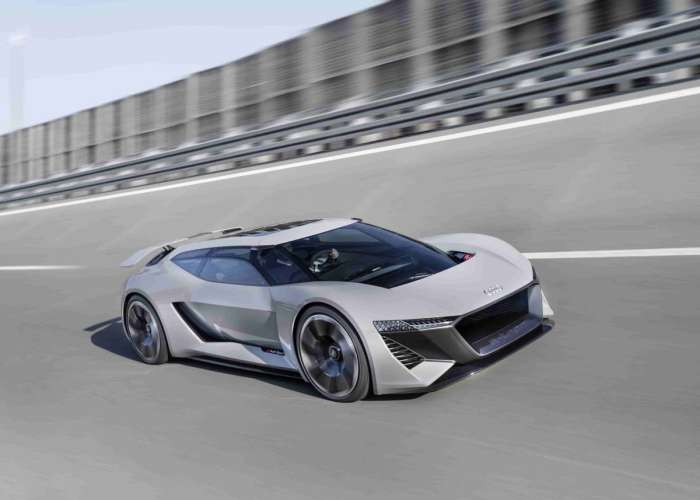 This week's Pebble Beach Automotive Show had lots of interesting iron available both new and old. One of the more interesting models was Audi's PB18 electric. Made for ontrack moves as well as daily errands, the PB18 features a unique driver's seat. Read on and see.
Advertisement

Sometimes you look at an automaker wonder exactly what is going on behind locked – and sometimes barred – doors. Take Volkswagen, for instance. For months, it has looked as if the automaker was going autonomous as it shopped around – and purchased – various startups and near-startups dealing with autonomous technology. It seemed the driver’s seat was going the way of the passenger pigeon – headed toward extinction.

Now that vision of the of the future has had a very real challenge. VW’s Audi subsidiary’s PB18 e-tron concept challenges that assumption in a major way. Unveiled at this week’s Pebble Beach Automotive Week, the e-tron concept features a vehicle that requires a driver. It flies into the face of VW’s autonomous vehicle concepts.

The PB18 is an electronic racer that can be used on and off the track.

As part of its unveiling of the PB18, Audi showed a moveable driver’s seat that can quickly readjust from the track to regular driving and back again. One assumes that if this makes it to production, the driver will sit at either window. The performance driving setting has the driver sitting at the center line, the best position for competition, on-track driving.

Audi has called the PB18 “Level Zero.” The term is a hat’s off to the five levels of driving automation that the automaker has identified as it did the concept work in the studio. Audi’s original base design concept harkens to the architecture of a gas-powered mid-engined sports model. The PB18 uses a solid-state battery and three electric motors as its powerteam. It has some very quick legs as a 2-second 0 to 100 kph (62 mph) run attests. The concept features a reported electric range of more than 300 miles.

According to Audi, the concept’s building blocks include aluminum, carbon, and mixed composites. The exterior styling is low-slung. It comes with 22-inch wheels.

And while the exterior design is a bit on the surprise side, the automaker indicated that adjustable driving seat is another unique feature.

“We want to offer the driver an experience that is otherwise available only in a racing car like the Audi R18,” Gael Buzyn, head of the Audi Design Loft, Malibu, Calif., said in a statement.

That’s why the automotive design think tank developed what they believed was the ideal position at the center of the car. Nevertheless, we “aimed to also give the PB18 e-tron a high degree of everyday usability, not just for the driver but also for a potential passenger.”

The overall vehicle design features a large C-Pillar and sail area plus a sloping roofline. Audi calls it a vehicle with a design that is reminiscent of a shooting brake concept. This concept merges a coupe front with the rear of a station wagon. There’s an interesting taillight styled as one single red taillight that extends along the back of the vehicle.