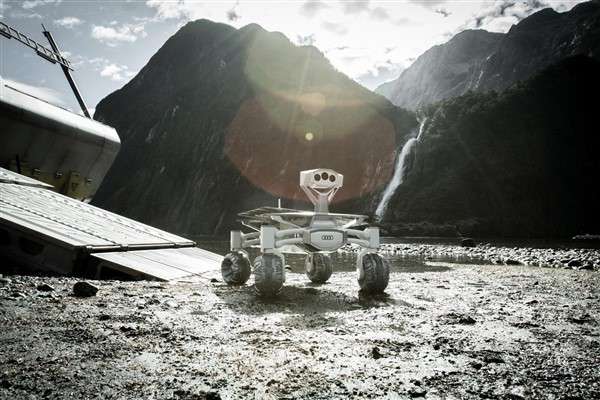 Wait a minute! When did an Audi Lunar Rover become the hero of a movie? Oh, it never has, has it? Well, think again, because "Alien: Covenant" uses one quite successfully -- honestly.
Advertisement

The next time you see “Aliens” bursting out of human middles, the chances are good that you will have been watching “Alien: Covenant,” the latest epic space-shock blockbuster from the mind of director Ridley Scott.

So What Do You Think Happens When Aliens and Humans Meet?

This piece of the shows what usually happens when a group of fun-loving people runs squarely into a group of equally fun-loving aliens. Whether they are on the same spaceship or planet, those madcap foes engage in lots of deep space camaraderie and tricks like using humans as incubators while the human bang away with their space cannons and such. Earlier versions certainly weren’t for the faint of heart, but they were great space opera.

In this, the fourth installment of this franchise, there’a new star on the scene, one that remakes the “Alien” franchise. The new hero of “Alien: Covenant,” is quite literally aluminum-jawed and has a great frame. Those attributes can, of course, describe nearly 100 percent of all space heroes, so what makes this one different?

Ok, rather than make you wait, I’ll tell you that the new hero is a newly developed Moon Rover Audi, Lunar Quattro. Audi’s experts developed the Rover in cooperation with the German start-up “Part-Time Scientists.” The Rover is expected to take part in a real future space mission.

Director Scott has tightly integrated the Lunar Quattro into “Covenant.” In this chapter of the franchise, a colony ship, the Covenant, is bound for a remote planet on the far side of the galaxy. As they plow along on their predetermined route, those who have the watch – the guys who drew the short straws and have to stay up instead of sleeping their way to the new Nirvana – find an unknown world that is supposed to be a paradise.

Everything Goes To Pieces, So What Else Is New?

But, you know how Scott works, don’t you? As soon as they slow to some reliably slow pace so they can spec things out, the universe goes to pieces on the “Covenant.” They find the new world is dark and foreboding, full of things that like humans just a tad less than medium well with a side of some goo or other.

True to Scott’s form, the crew finds a threat that is right at the edge of their imaginations, and they have to escape from the world that hates them. True to form, our hero vehicle plays an integral role in getting the humans out of there before they become the latest condiment on the “Alien” Food Network™. It also helps Faris, played by Amy Seimetz, navigate and assess the challenging known terrain of the new planet.

Twentieth Century Fox and Audi worked closely at incorporating the Lunar Quattro into the film. “The ‘Alien’ franchise is the best way for us to garner suitable attention for the Moon rover developed by Audi, and to showcase Audi’s intelligent technologies in a visionary environment,” explained Giovanni Perosino, Vice President International Marketing Communication at Audi.
“Fox’s partnership with Audi on ‘Alien: Covenant’ is an opportunity to bring to the forefront the innovative work Audi is doing in exploration,” said Zachary Eller, Senior Vice President Marketing Partnerships at 20th Century Fox. “We’re happy to continue our long relationship with Audi that has allowed our filmmakers to incorporate authentic, leading-edge technology into their futuristic worlds.”

Audi Lunar Quattro Will Head To Moon, For Real

The Audi Lunar Quattro is preparing for an actual mission to the Moon. Since 2015, the premium manufacturer from Ingolstadt has worked with a team led by Robert Böhme, founder, and CEO of Part-Time Scientists, on developing the rover. Audi experts have supported the Berlin-based start-up, in particular with Audi’s all-wheel drive expertise (quattro technology), expertise in lightweight construction, experience in developing vehicles with electric and plug-in hybrid motors (e-tron), and with design optimization.

By selecting the finest materials, the developers have managed to reduce the weight of the exploration vehicle to just 30 kilograms. The Audi Lunar Quattro is 85 percent aluminum, produced by the 3D metal printer at Audi’s headquarters in Ingolstadt. A pivoting solar panel supplies the rover with energy. On top of that, you have smart Quattro drive technology and the efficient e-tron motor. The car manufacturer’s lunar rover project is nearing completion: In the future, we can expect to see the advanced Audi Lunar Quattro set its course for the Moon.