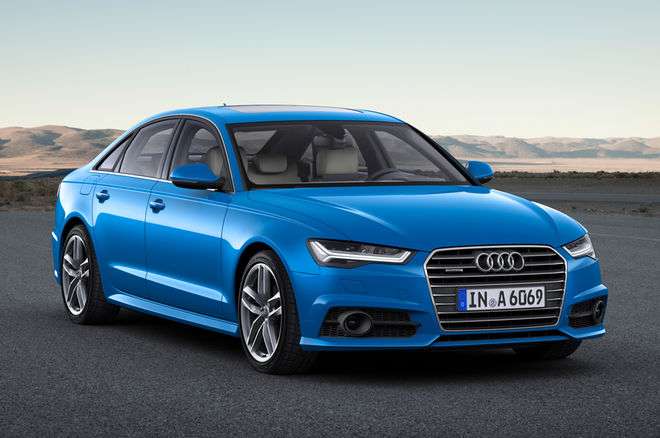 Auto spies saw the Audi 2018 A6 making the rounds of some German roads this week in heavy camouflage. Though camo-bedecked, the auto sleuths managed to see that the front end features significant changes. The greenhouse also appears larger. Reports indicate engine choices have also been cut back.
Advertisement

When the 2018 Audi A6 hits the road early next year look Audi to make it different than its siblings, the A4 and A8. Auto spies saw the camo-bedecked A6 tooling around German roads recently. Their sighting confirmed the predicted changes, yes, the A6 will go its own way.

Though covered to keep prying cameras from seeing too much, some things it is easy to make some predictions after seeing the A6 in the wild. The fifth generation sedan looks as if it will feature larger headlights, while the overall lines of the midsized luxo-sports sedan indicated it has improved aerodynamics.

The grille appeared to be much more pronounced than the fourth generation effort. The greenhouse also seems larger, so it is likely there is more interior headroom and shoulder room for starters. It is entirely possible that the rest of the interior has been redone to give occupants more space all around.

The 2018 A6 will likely use the automaker’s turbocharged inline four as its primary powerplant. To give motorists a larger, normally aspirated engine, Audi will probably use the corporate 3.0-liter V-6. In this go-around – 2017 -- the A6 offers a turbocharged V-8 as the final engine option. For 2018, only the RS6 will share the 4.0-liter V-8, introduced this year on the Porsche Panamera.

On the inside, according to Automotive News, it is more than likely that the A6 will employ Audi’s virtual cockpit concept. Built around a new large-screen display, the electronic instrumentation can be customized to meet anyone’s preferences. The virtual cockpit will also feature startling navigation displays.

Look for the 2018 Audi’s debut at the Frankfurt Auto Show in the fall. It is scheduled to go on sale in the U.S. early next year.