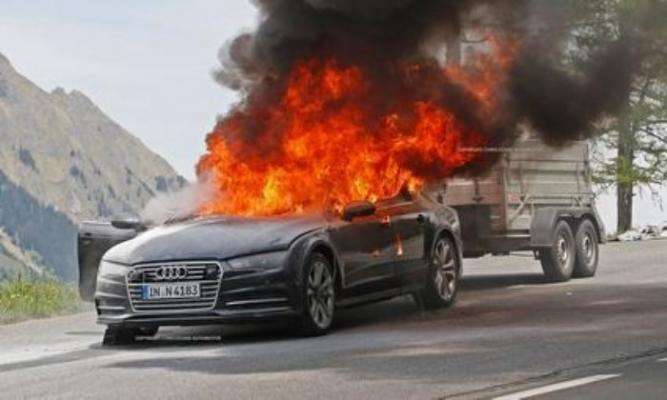 Audi loses A7 Test Vehicle to Fire on an Alpine Road

An engineering unit, testing an A7 pulling a huge trailer on an Alpine road. found the A7 bursting into flames. As the fire consumed the vehicle engineers pulled out their equipment. Only one team member grabbed an extinguisher but it was too little, too late.
Advertisement

You’ve heard of the flame test, haven’t you? If you haven’t, don’t worry, it was not even in Audi’s playbook until Thursday when a group of engineers using a new A7 found out about the flame test at the side of an Alpine road. Audi A7 Burns on Alp Road

Not a test, but it was still a fire in an Audi

Honestly, the flame test is more impromptu than a relevant or even non-relevant part of Audi’s testing manual, but, yesterday it went something like this.

Audi engineers, using a new A7 as a test mule, chained a dead weight trailer to the sedan as they tested the car in the Austrian Alps. As they put the A7/trailer combo through its paces, a fire erupted from underneath the test vehicle.

A video shot of the fiery trip showed the test engineers turning the car around and into an emergency pull off after which they pulled out all of the test equipment from the A7.

You have to give one member of the engineering team real credit for standing up to the new development. Instead of being a slavish conformist who would have leaped to save the test equipment first and the car second, this engineering hero jumped into action to save the test mule.

Fighting the blaze with just a hand-held fire extinguisher, the engineer was quickly overwhelmed by the force and tenacity of the fire. To his credit, he did fight the fire, though he likely knew it was a losing cause. Within 15 or 20 minutes, according to eyewitnesses, the vehicle was a goner. A local fire crew arrived on-scene and quickly extinguished remaining flames, though there was little left.

Audi plans to begin selling the A7 in the fall in Europe.

LG's New EV Battery Plant Is a Welcome News for Tesla
Tesla Giga Berlin's New Hurdle: It's Not Only the Gov't, but Now Tesla Itself
END_OF_DOCUMENT_TOKEN_TO_BE_REPLACED