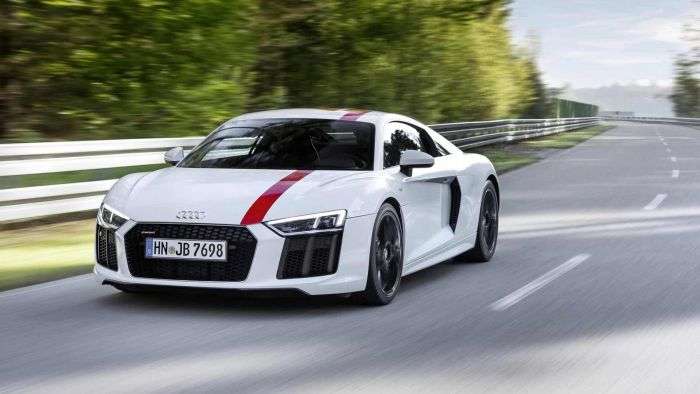 Audi gives itself quite a competitor for the R8; a limited-edition rear-drive model

Befrore another manufacturer could give the Audi R8 supercar any competition, the automaker created its own competitor, a limited-edition rear-wheel-drive model with a twist.
Advertisement

Here’s a question that just popped up as I worked on a story about the upcoming Audi R8 RWS. Why is Audi doing it this way?

Which way is that? It’s simple. It is taking its R8 all-wheel-drive supercar, making a drivetrain change which also cuts its weight, and offering it for a substantial price cut? Audi gives itself an interesting competitor, itself.

The result is Audi’s soon-to-arrive R8 RWS (Rear Wheel Series). The change makes things interesting. Which one would you buy? The heavier all-wheel-drive R8 that has drawn raves from reviewers or the new rear-wheel-drive, mid-engined V-10 version with its new powertrain. The R8 (RWS) is lighter than the R8.

Some would argue that the all-wheel-drive version is still the better bet. However, what about a rear-drive version which is a good $26,000 cheaper than the AWD R8?

Officially, Audi has tagged a price of $139,950 on the R8 RWS, while the least expensive R8 is priced about $166,150. Audi's R8 has interesting features. And, the more powerful R8 V10 Plus tops out at $195,650. And, while the RWS may be less expensive in the long run it could be the better investment. This is because there will be a limited number of R8 RWS models heading for the U.S. Just 320 copies of the rear-wheel-drive supercar will roll off delivery ships as they head for their final destinations. Considering the limited number, the RWS is already the more desirable model.

Some might be concerned that the weight change could mean that the handling could be compromised, but, Audi has handled it by making the front anti-roll bar 10 percent stiffer.

There’s no official release date for the rear-wheel-drive supercar, but, a source in Audi did tell the media that it will likely make its debut at dealerships later this year. Or, to put it a little more officially, we can expect the RWS supercar in the fourth quarter.