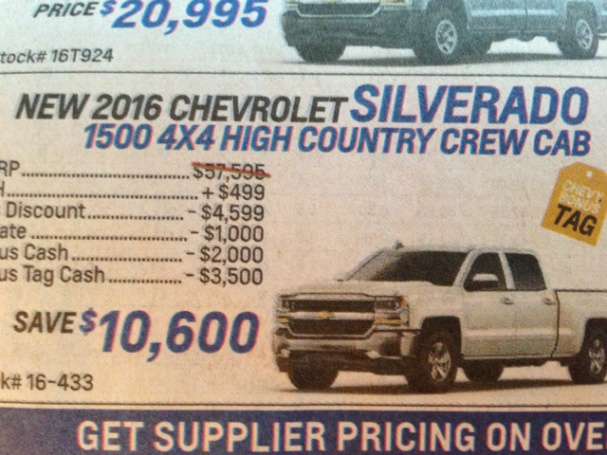 If you are considering buying a new pickup truck, now may be the best time. Both GM and Ram are offering huge incentives on 2016 models. Ford dealers are offering price cuts that appear to be less aggressive.
Advertisement

Now is the time when manufacturers and dealers are attempting to clear out the 2016 models and make room for the 2017s. That timing, coupled with the slowing sales market, is leading to huge discounts on some of the pickup trucks. If you are in the market, and don’t have to have the brightest, shiny 2017, now make be the time to get a great deal.

A check of the advertisements, on-line and in the local Denver papers, finds that both Chevrolet and Ram are offering deals of around $10,000 on certain models of trucks. The best I could find for Ford F-150s was discounts of around $4,700.

Fiat Chrysler’s recent sales figures were strong, based in large part on great Ram sales. Those truck sales were spurred by manufacturer’s discounts. GM quickly followed and their sales were also strong. Ford’s figures were down both because of less robust sales and some huge expenditures for mobility companies.

There are some catches to the great deals. You have to buy a vehicle currently in stock, no special ordering. A dealer may trade around to get you exactly what you want, but not necessarily. Also, the largest discounts are on the most expensive or loaded vehicles. Stripped down versions don’t appear to qualify. As the dealers empty their inventories, some of the incentives may be reduced, but these deals seem to be the best so far this year.

It used to be that the Detroit Three would just continue making as many vehicles as possible and then slash the prices to sell them. That policy changed when two of the Detroit Three went through bankruptcy and Ford was teetering on the edge. Then Ford CEO Alan Mulally was adamant that the company would only build the amount of vehicles that it could sell. Reducing inventory would allow the company to protect its pricing structure. Ford has recently shown that same strict control by idling the Mustang plant for a couple of weeks to manage inventory.

General Motors and Fiat Chrysler are offering lots of incentives on other vehicles, but the price cuts on the pickups are the most noticeable. Percentage-wise they may also be the most significant because the fully-loaded pickups are some of the most expensive vehicles on the lots. It is surprising to see the auto companies slashing prices like they did before bankruptcy. It might be the perfect time for people in the pickup market to take advantage of it.