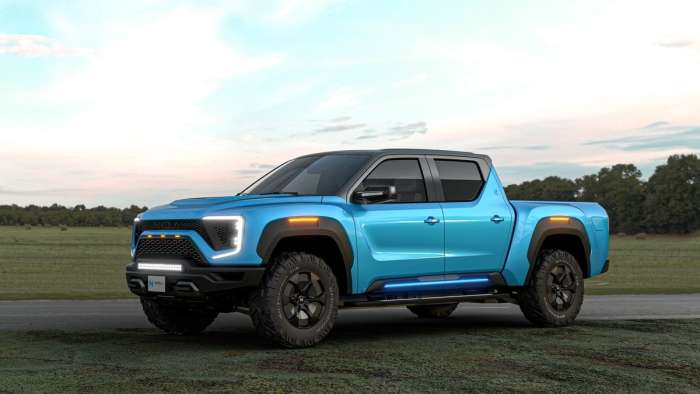 Why GM is Teaming Up With Nikola to Build Electric Trucks

GM and EV upstart Nikola are joining forces to accelerate the EV programs for both companies. GM will even build Nikola's Badger electric truck for them.
Advertisement

General Motors and Nikola Corporation are teaming up in the race to produce electric pickup trucks. Both companies are using this ten-year partnership to compete with Tesla, as well as the Ford/Rivian combination. General Motors has promised to electrify pickups in the near future and what the company learns from Nikola will certainly bolster that plan. General Motors will receive $2 billion stake in Nikola, while Nikola will use GM’s new Ultium battery system and have GM build the pickups.

“This strategic partnership with Nikola, an industry leading disrupter, continues the broader deployment of General Motors’ all-new Ultium battery and Hydrotec fuel cell systems,” said General Motors Chairman and CEO Mary Barra. “We are growing our presence in multiple high-volume EV segments while building scale to lower battery and fuel cell costs and increase profitability. In addition, applying General Motors’ electrified technology solutions to the heavy-duty class of commercial vehicles is another important step in fulfilling our vision of a zero-emissions future.”

Why Both Companies Win in the Deal

Both companies expect to see about $4 billion in benefits from the partnership.

General Motors will get a $2 billion stake or about 11 percent of the Nikola Corp. General Motors will engineer and build the Nikola Badger. Some of the trucks will be the battery electric vehicle, others will be fuel cell electric vehicles. Nikola will use the GM Ultium batteries and GM Hydrotec fuel cells. GM workers will build the vehicles, starting in late 2022, in a plant that hasn’t been announced yet. GM will also supply fuel cells for other Nikola trucks outside America. Selling the battery and fuel cell technology helps offset the development costs for GM.

Nikola expects to save over $4 billion over the next ten years by not having to create and build the batteries and powertrains. They also expect to save $1 billion not having to do all of the testing and engineering involved in finalizing the truck design.

Nikola is based in Phoenix. The company announced plans to build the Badger electric pickup in February of 2020. Nikola’s founder says this partnership will help the company achieve its goals ahead of schedule.

“Nikola is one of the most innovative companies in the world. General Motors is one of the top engineering and manufacturing companies in the world. You couldn’t dream of a better partnership than this,” said Nikola Founder and Executive Chairman Trevor Milton. “By joining together, we get access to their validated parts for all of our programs, General Motors’ Ultium battery technology and a multi-billion dollar fuel cell program ready for production. Nikola immediately gets decades of supplier and manufacturing knowledge, validated and tested production-ready EV propulsion, world-class engineering and investor confidence. Most importantly, General Motors has a vested interest to see Nikola succeed. We made three promises to our stakeholders and have now fulfilled two out of three promises ahead of schedule. What an exciting announcement.”