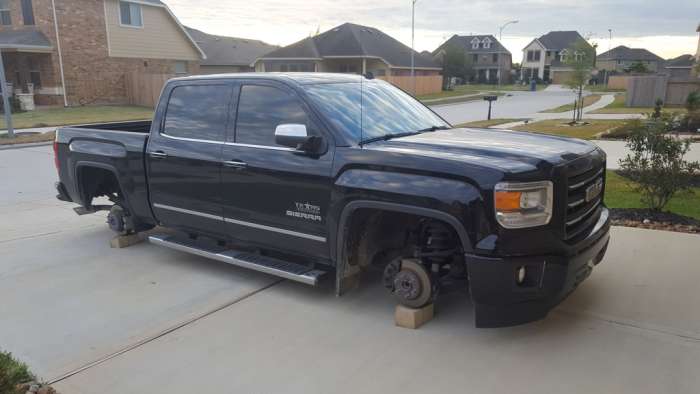 In a post called "Tis the season," the owner of a 2014 GMC Sierra warns others about recent thefts happening in Houston. It is also a real eye-opener for everyone about how much these wheel thefts cost!
Advertisement

The Houston owner of a 2014 GMC Sierra posted this week-end about what thieves had done to his truck, in his driveway. We’ll call him DCA. He says “My wheels were stolen last night as well as my neighbors that has a Sierra as well with the same 20" Sierra chrome wheels. What i would like to know is how does the process go in the insurance replacing the rims and tires? Do i get the same LS-2 tires or do I have a choice? I will also get OEM wheel replacements correct? I already have the police report and filed with insurance.”

Unfortunately, this is going on all over the country, and it seems to pick up as we get closer to the holidays. The thieves may only get a few dollars for the stolen wheels, but DCA is finding out that the real cost for such a miserable crime.

DCA had parked in the middle of his driveway so he couldn’t get his other vehicles out of his garage and he had to call a tow truck to take his 2014 GMC Sierra to the dealer. He has insurance but he knows it will cost him more than his $500 deductible. He had no idea how much more.

Other drivers started warning DCA right away. “Make sure to insist that you want OEM wheels from dealer not replicas. Insurance company will offer to let you pick wheels and tires from a shop to avoid paying full price of OEM wheels.”

An Illinois driver warned that the thieves may have done more damage by leaving the truck on blocks. “Also ask about rotor replacement?”

A Kentucky driver tells DCA to stand firm “tell the insurance you must have GMC replacement products only and like 01LS1 stated since they did that to your rotors I would have them replaced also.”

DCA is perplexed because the thieves might have had the key to his factory wheel locks. “Also, It did have the factory locks but those were removed with a key i'm assuming as they left them behind and have no damage to them.” That makes it appear as though the crooks worked at a dealer or tire store at one time or another.

There are tools that defeat the locking lugnuts, but someone would have to put thought into buying them. Usually, they just steal the tools, too.

DCA is planning to have cameras installed, but others warn him that is just a deterrent, not prevention. “Cameras are only a deterrent. It's like a fence, if they want to come in our backyard, a fence isn't going to stop them. Someone wanted those wheels for another truck, I'm sure they are on another vehicle by now probably rolling past his house. Those aren't something traceable, besides, the police aren't going searching for wheels.” Unfortunately, police rarely have time to search for something like stolen wheels. Frequently, stolen goods like wheels are pawned or sold to the repair shops that deal with chop shops.

DCA got an estimate from his dealer, “I did get a quote from the dealer of $5648.27 to replace them. I will have to pay my $500 deductible but everything else is covered including my rental.” $5600 for new tires and wheels. That is a sobering amount and it doesn’t include any possible damage to his rotors.
It is a note of caution to everyone, especially truck owners about the cost of replacing stolen items. It is an endorsement of security cameras and upgraded wheel locks, anything that may scare the thieves away.

A police officer once told me a long time ago, “You’ll never stop a thief from stealing a vehicle. You want to stop them from stealing YOUR vehicle. Do anything you need to, to make it difficult for them so that they will move on to another vehicle.”

DCA is lucky that he has replacement insurance. Not everyone has that great of coverage.