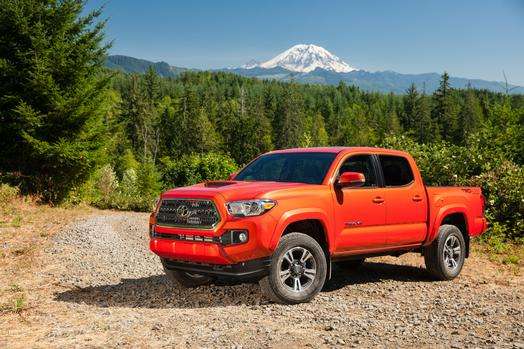 How Toyota Tacoma ups the ante against Chevy Colorado

Facing growing competition from other midsize trucks, Toyota is boosting production of its popular Tacomas. Currently, the Tacoma controls the midsize market selling 180,000 of the smaller pickups annually and it is investing in a Mexico plant to increase production by at least 60,000 vehicles per year.
Advertisement

Automotive News first reported that Toyota was investing $150 million in the plant in Tijuana, Mexico. Toyota confirms that the investment is to increase output.

The midsize truck market is surging, with GM aggressively improving its Chevy Colorado and GMC Canyon to challenge the Tacoma. The Nissan Frontier is also selling well and the Honda Ridgeline is recently upgraded. Ford is not yet back in the midsize game although there is talk that the redesigned Ranger will be back for 2018.

Still, Tacoma has the number one position. The Chevy Colorado is doing well, at 160,000 vehicles sold since it was introduced nearly two years ago, but Toyota sells more than that annually, and believes that short supply is holding down its sales numbers. The Nissan Frontier sold more than 60,000 units last year, dramatically up from previous years.

Toyota is also adding hundreds of jobs to the Mexico plant, to handle the expansion. This comes at a time when other automakers are being hammered by politicians for moving jobs out of the U.S. Toyota will more than likely not receive as much criticism because it is a Japanese automaker. Toyota also builds the Tacomas at a plant in San Antonio, Texas. However that plant also builds the full size Tundra pickup and is already at capacity.

Even though the additional capacity won’t materialize until late next year at the earliest, the Tacoma has a significant head start in the midsize arena. GM is promising that the 2017 Chevy Colorado and GMC Canyon will both have an all-new V-6 engine and eight-speed transmission, creating a combination that is unmatched in the smaller pickups. The transmission is supposed to improve towing capacity. They are also improving the off-road handling.

The Tacoma TRD Pro prides itself in excelling in off-road conditions. Toyota has a huge advantage because it introduced off-road packages for the Tacoma in 1998 and has steadily improved the performance.

Lee wrote on September 16, 2016 - 3:34pm Permalink
Nissan's trucks are so stale they ought to be ashamed. They increase sales by lowering prices and giving incentives, not by offering a competitive product. Plus they're ugly. I'm hoping their soon-to-be-introduced new generation offer a big styling refresh. Tacoma and Colorado both prove that a compact pickup can be exciting.
Mary Conway wrote on September 17, 2016 - 4:28pm Permalink
Pricing is important, Nissan trucks are up 45 percent and it has to be because of the price. A lot of people are hoping that the next Nissan will be a new generation!
Pao Yang wrote on September 16, 2016 - 10:05pm Permalink
I believe Toyota has good egineers and good marketing experts that understand conumerous life style and satisfaction.
Mary Conway wrote on September 17, 2016 - 4:30pm Permalink
They have done very well and until this generation, their quality was stellar. It will be interesting to see how they do if Ford enters the market and if Nissan does a new generation.
Lee wrote on September 17, 2016 - 4:40pm Permalink
Yes things are going to get interesting very soon. Right now we have Tacoma vs. Colorado with Nissan not even in the hunt. The market will double with a new Ranger and a new gen Nissan. Wouldn't it be nice if the new gen Frontiers did everything the Tacoma does and more - 8-speed trans, 6-speed stick offered on all models, slick styling, moonroof, rear disk brakes, good mileage, diesel option. Never did understand the Ford Ranger - plenty of people liked it but I thought it was crap, how good could it have been if Ford dropped it, why drop out of a popular market segment and then come back to it? Ford has a chance to really kick ass here, do everything as well or better than the other 3 plus an aluminum body.
Mary Conway wrote on September 17, 2016 - 6:25pm Permalink
Perhaps Ford needed to focus on getting the aluminum F-150 right. I also wondered why they left the market. It will be interesting to see the pickup wars as they heat up !
Donnie wrote on September 26, 2016 - 8:37am Permalink
Except for the frames rusting out