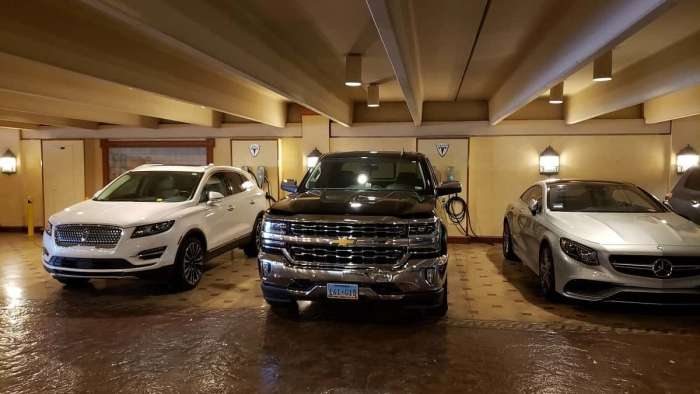 Should Gas-Powered Car Drivers Be Fined for Parking in Electric Spots?

This debate may soon be coming to your state. Colorado is considering a law fining drivers for blocking electric car charging spots.
Advertisement

My colleague, John Goreham, sent me a picture of the situation that infuriates electric car owners. Several gas-powered vehicles blocking spots designed for electric car charging. Colorado is currently considering a new law that would fine people who illegally park gas-powered vehicles in electric car charging spots. The law would fine drivers $150 plus a $32 surcharge for parking in the spaces that provide the life blood for vehicles like Teslas and Nissan Leafs. While the practice can be annoying, it can also be dangerous. For electric car owners, the charging spots are as important as gas stations. Denying them access to fuel can leave the driver stranded.

Colorado ranks fifth in the nation for the number of electrified vehicles purchased. The problem of available charging is expected to grow as more car companies add plug-in or electrified vehicles to boost their overall corporate fuel economy averages. The problem is especially worrisome because some of the charging sites are listed on apps. The apps would show the spots as technically open even though they are physically blocked by non-electric vehicles.

The Denver Fox affiliate quotes Colorado Auto Dealers Association President Tim Jackson as saying that the problem is not that bad. CADA has four charging spots in its parking lot. Jackson told the reporter, “I can count on one hand how many times that I’ve had somebody park illegally in one of those spots."

The Colorado House has already approved the bill and the Senate is expected to consider it soon.

According to a website run by PluginSites.org, several states including California, Washington, Oregon, Arizona, Illinois, Massachusetts, Rhode Island, Hawaii and Florida have made it illegal to park in electric charging stations unless you have an electric vehicle. Fines for the illegal parking in the different states vary. Local municipalities like Seattle and Washington D.C. also have passed similar laws.

You can read the entire Colorado bill here.

David Radzieta wrote on April 24, 2019 - 12:25pm Permalink
Fined and towed. It is very important for EV owners to have access to charging spots. It could be live or death in some instances just as an available gas station could be life or death for a gas powered operator.
David Radzieta wrote on April 24, 2019 - 12:26pm Permalink
Levy the same penalties for taking an handicapped spot.
Brad Coppenbarger wrote on January 22, 2021 - 3:59pm Permalink
Can’t help but notice that more and more the spots given for charging stations are along side the handicap stalls (up front which is vital to the handicap). Maybe if the stalls were dispersed or placed in locations not up front of businesses, the occurrences would be less frequent.