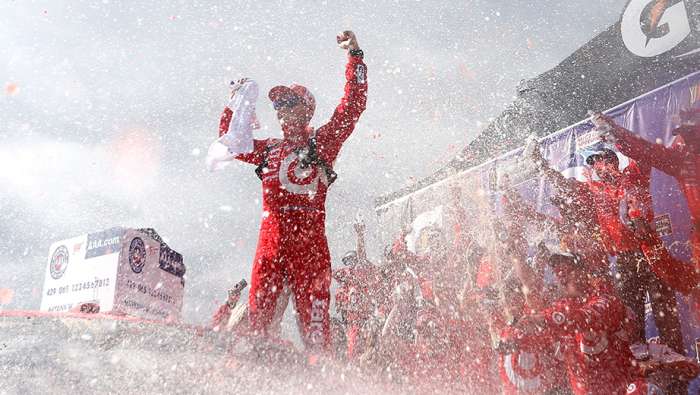 NASCAR changed the format of this year's races trying to spur interest in the races. The races are now divided into three shorter segments. Fans weigh in on what they think of the new look.
Advertisement

The new scoring system is confusing at best. The races are now divided into smaller segments and NASCAR describes the scoring like this. “Each race is comprised of three stages -- Stage 1, Stage 2 and the Final Stage. Drivers who finish in the top 10 in Stage 1 and Stage 2 earn additional race points, with the winner of each stage earning 10 points, second place earning nine points, third place earning eight points, etc., down to one point for 10th place.” Good luck with that.

NASCAR is attempting to draw new interest in racing and also trying to stop declining television ratings. It does not appear to be working. According to Sports Media Watch, the ratings for the Fontana race were a dismal 2.9 overnight rating on Fox. That rating is down 17% from last year and supposedly the second-lowest for any NASCAR Cup race on Fox since 2001. Only the Daytona 500 was apparently up in ratings, from last year.

I did a very unscientific poll of my Facebook friends to see what they think of the new format. Please understand that most of my friends love anything automotive and many are race aficionados. Here is a sampling of their responses to the new format. Kathy is an avid race fan and says, “Not a fan. If they are going to do segments I'd rather see heat races and a main.”

Mike says, “It's OK. What they need to wok in is getting some drivers with a personality. They need rivalries like back in the day with Gordon and Earnhardt.”

J.D. says, “Not a fan at all. Reminds me of the Shoot Out. Makes me want to change channels until the end of each segment.”

Thomas believes it has improved the sport. “Better racing. Rewards drivers for the whole day’s racing not just the end.”

Jan responds, “I like it as it encourages them to race through the entire race to secure points for the championship vs. hanging back and waiting until the end to race.”

John says he doesn’t watch but his friends don’t like it. “. I've overheard a few NASCAR devotees in the last week or so and they're getting tired of the new format.”

Larry gives NASCAR points for trying. “It is a clever way to score driver points, and my guess to encourage more competitive racing earlier in the race.”

John replies, “NASCAR is losing fans in droves. TV ratings are down by a lot, attendance at races is scary skimpy. The writing is on the pitwall: change or die.”

Paul says, “A perfect example of management who behind the scenes recognize they have a sport in decline, and then elect to go with gimmicks rather than what built their sport in the first place.”

Scott says, “Hated it at first, now I'm at peace with it. I want to see how it actually affects the scoring when it comes to the chase.”

Rodney actually enjoys the change. “I like it! I think it makes the entire race more exciting and not just the last few laps.”

It will be interesting to see if these changes can reverse the trend of dropping ratings and attendance. Fans wonder if NASCAR would have greater success by altering the restrictor plates or dropping them entirely!

rb wrote on April 6, 2017 - 3:50pm Permalink
nascar ratings and attendance down? Well, we as consumers get are car (looks, speed, racing) fix from reality tv - There are at least 20-25 car shows on reality tv (Fast & Loud, chasing cars, bitchin rides, counts customs, etc...) And we get our fix from the fast and furious movies...Coincidence 2001 Dale earnhrdt dies and that was the year 2001 the first fast and furious movie debuts. Nascar doesn't get it, the stars are the cars!...some personalities shine through from time to time (Gordon, stewart, etc...) but the cars and the speed are the stars...when that's over, nascar is done...and nascar is done...same thing with the nfl, boring,...watch an nfl game recently? kickoff,commercial,play, penalty, play, play,red flag official review,commerical, punt, commercial, etc...boring...are "entertainment society" is coming to the end...nothing new under the sun...rant over...
Mike wrote on April 9, 2017 - 3:59pm Permalink
I decided not to watch racing this season after Denny Hamlin's comment. You don't have to know how a watch works we just need to know what time it is. Isn't that the same thing as telling the fans to basically sit back, shut up, don't get involved and don't understand how they're doing their job.
Jim Plemons wrote on May 21, 2017 - 3:11pm Permalink
We attended races a lot until France Jr took the rains of nascar. We went to races to see them race, not run 20 caution laps for the segments. That's what turns race fans off, besides drivers can't even settle their differences anymore with a little pushing and shoving without getting points deducted. Bring back racing like the old days and we the fans will return and fill the seats that are half full now...
AW25 wrote on June 29, 2017 - 8:54pm Permalink
Now that you mentioned it, didn't they have a whole big thing a while back, something like "boys have at it?" I'm still trying to figure out what happened to that, I stopped watching Nascar for about 3 or 4 years and I come back, the cars change, my favorite driver retires (Smoke) and then the abundance of changes is kinda shocking. I remember when it was a 12 car playoffs and JJ48# constantly winning, (main reason I quit on Nascar honestly no competition.) I got with the changes quickly and actually like them for the most part especially the car styles now but I'm not surprised Nascar is dying, I look out across the racing landscape and a lot of series are slowly losing popularity and very few are gaining where others are losing.
Chris wrote on July 18, 2017 - 7:26pm Permalink
So,for me the biggest reason is the political correctness that is rampant.A few years back the geniuses at nascar and ISC decided that they would tell fans that the Rebel flag is no longer welcome to events.WELL,as a southerner(not a racist moron)that stopped me from purchasing a ticket to Talladega,which I attended every race,because it appeared to me that though I am not racist,because I fly the Rebel flag,Nascar considered me racist!Then there is the green agenda as well.Sure it is great to use the E15.Try it in your stock car that you drive to work and do your running around everyday.The E15 causes the normal person to have to spend about three times as much for maintenance than they would otherwise.Then the "PHANTOM" cautions that fly.Used to be that unless there was a NOTABLE hazard on the track,the drivers had to be skilled enough to miss those "small pieces of debris".The latest turn off for me is the fact that although the equipment is the safest it has EVER been,Nascar insists on still using restrictor plates on the big tracks.Sure,Rusty says that at 228 the cars will not stay on the track bunched up.That is fine,but anyone ever notice that without plates there are usually about 15 cars that are truly competitive and they aren't running nose to tail for 500 miles.Removing plates would provide TRUE racing.Also the fact that Nascar is working to eliminate the plate tracks from points competition.Those are just a few.Of course there many others as to why I have lost my respect for Nascar.Hopefully the organisation will get a new chief and get back to racing.But I doubt it in my lifetime.Oh yeah,lastly,I can't stand to watch a race and the commentators tell me "that was a bad ACCIDENT",[NBC announcers].It was not an accident,call it what it is A CRASH!!!
Michael S Gore wrote on April 24, 2019 - 7:45am Permalink
Political correctness is the main reason I stopped being a fan. It used to be for southerners, now they dont want to be known for its roots. Other things that have turned me away are Drivers switching from different car manufacturers Teams, I wish it was a true lone racer sport No rubbing, pushing. And I hate it isnt an all american car lineup But political correctness is the main reason, same with nfl
Jo wrote on July 23, 2017 - 6:57pm Permalink
Never been a big NASCAR fan, check it out occasionally though. When I heard about this format, I thought that seems lame. The race from Indianapolis is on as I write this and I can not believe the amount of spectators. Or should I say lack off. Hardly anybody there. It's almost surreal. Stands used to be packed. Apparently the new format is not real popular. This sport is going to die if nobody wants to watch it.
ERF68 wrote on March 7, 2018 - 5:16pm Permalink
THEY DONT RACE ANYMORE I WANT TO WATCH A 500 MILE RACE NOT PARTS OF IT SORRY IF TODAYS DRIVERS CANT DRIVE THAT LONG BUT THE AGAIN THAT TODAYS KIDS
Gerald taylor wrote on May 26, 2018 - 11:12am Permalink
I agree, let them race 500 miles. If i want to watch heat racing i can go to a local track. I dont care about points. All i want is a real race.