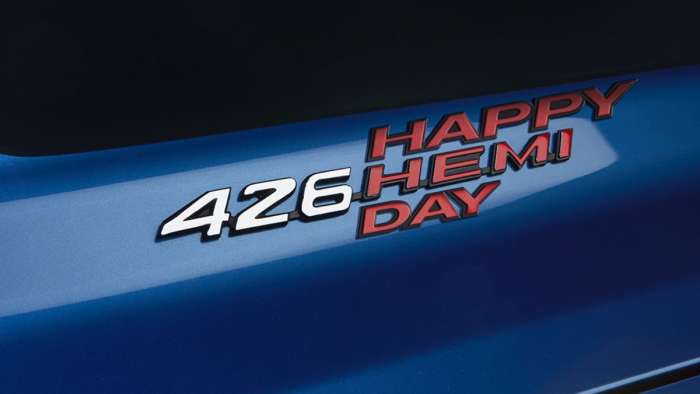 April 26 is the day set aside to honor the mighty HEMI engine. Welcome to #426hemiday, celebrating the engine that powers some of today's most powerful vehicles like the 2021 Ram TRX and the Dodge Challenger SRT Hellcat.
Advertisement

From Dodge Chargers, to Challengers, to the mighty 2021 Ram TRX, the HEMI engine commands respect. The second generation of the popular, powerful HEMI engine displaced 426 cubic inches and that is why muscle car fanatics celebrate 4/26 as HEMI Day.

What is a HEMI?

HEMI gets its name from the engine’s hemispherical shaped head. The engine itself was huge and it required more room in the engine compartment than other engines. Some called it the “elephant engine” because of its size and weight.

HEMI is Known for Power and Speed

A HEMI engine was originally used in 1951 but it is the second generation that debuted in 1964 that is renowned for its racing prowess. For example, there is a legendary '67 GTX known as “the Silver Bullet” that supposedly never lost on Woodward Avenue. Back in the late 60’s and early 70’s, muscle car fans were known to race late at night on Woodward Avenue, north of Detroit. The Silver Bullet sported a 426 HEMI and reportedly never lost. The vehicle is often spotted at car shows, especially the Woodward Dream Cruise, where it is revered.

Chrysler, now Stellantis, has gone on to develop even more powerful HEMI engines. Now, they have a 6.2-liter Hellcat engine that kicks out 707 horsepower. It is a version of this HEMI that powers the 2021 Ram 1500 TRX. When the truck debuted, its power surprised even Ram. This is from a story I wrote in October of 2020. “The 702-horsepower TRX has crushed competitors with its 0-60 mph acceleration. The TRX did 0-60 in an incredible 3.9 seconds. The speed surprised even Ram which estimated that the TRX would do 0-60 mph in 4.5 seconds. The Ram TRX is the first production pickup to break the 4 second mark.

The truck, which some have called the “Beast,” did amazingly well off-road, clocking 0-60mph in 5.1 seconds. When it debuted, Ram executives promised that the TRX would smoke the competition, and they weren’t kidding. Truck fans have been waiting for this huge horsepower truck since the TRX was shown as a concept in 2016. Designed to challenge the Ford Raptor, Ram promising the 2021 Ram TRX would be the fastest and most powerful mass-produced truck on the market. The 6.2-liter supercharged HEMI V-8 delivers 702-horsepower and 650 lb.-ft. of torque. The TRX’s frame uses high-strength steel to improve durability and stability both on and off-road. The HEMI V-8 is mated to an eight-speed TorqueFlite transmission.

A version of the Hellcat HEMI is found in these Stellantis vehicles.

An even more powerful version of the HEMI V-8 is called the Demon. It can be found in the Dodge Challenger Demon and is rated at 808 horsepower. Jeep and Dodge are also marketing versions of popular vehicles with their 392 HEMI. A new 2021 Jeep Wrangler 392 is just debuting and early sales have been brisk.

It is easy to see why so many people are anxious to celebrate the HEMI engine for its power, speed and durability.