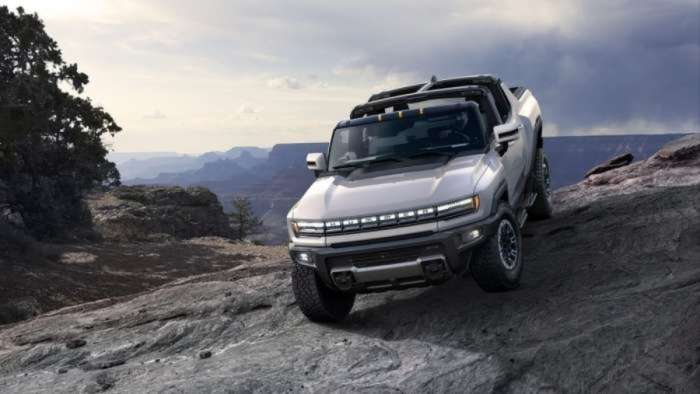 With products like the 2022 GMC Hummer EV Supertruck heading to market, GM is trying to look more modern. They are transforming their logo to reflect how the automaker is transforming.
Advertisement

Often accused of being stodgy and too slow to move, GM is introducing a new logo and marketing campaign as it tries to compete with Tesla in the EV marketplace. GM was the first of the Detroit Three to mass market electrical vehicles with the Chevrolet Volt and then the Bolt but the 2022 GMC Hummer EV is a huge leap in the EV race.

According to GM, the new logo with a mix of green and blue is “evoking the clean skies of a zero-emissions future and the energy of the Ultium platform.” The lower-case font is meant to create a more modern, inclusive feel. The shape of the lower-case M resembles an electric plug.

“There are moments in history when everything changes. Inflection points. We believe such a point is upon us for the mass adoption of electric vehicles,” said Deborah Wahl, GM global chief marketing officer. “Unlike ever before, we have the solutions, capability, technology and scale to put everyone in an EV. Our new brand identity and campaign are designed to reflect this.”

“Everybody In” Advertising Campaign

GM is starting a new ad campaign called “Everybody In” trying to encourage buyers to adopt EV vehicles and technology. GM has invested $27 billion in EV and AV products through 2025. The automaker is promising to launch 30 new electric vehicles globally by the end of 2025. GM will also be highlighting the versatility of its new Ultium platform.

GM is banking heavily on its Ultium technology. It will be the basis of the all-new 2022 GMC Hummer EV. GM says the platform will be capable of allowing an EV to go 450 miles on a single charge. GM claims some of the EV models will be able to go from 0-60 in as little as three seconds.

The EV range has been the big hold up for GM’s vehicles in the race against Tesla. GM has not yet had a platform that can compete with Tesla’s range. GM believes the Ultium technology will give them the edge. Ultium will also power the all-new Cadillac LYRIQ.

“GM has the talent, technology and ambition to advance a safer world for all, help reduce emissions and accelerate toward our all-electric future,” said Wahl. “‘Everybody In’ demonstrates our intent to lead, while inviting others – policymakers, partners, individuals – to play an active role in moving society forward, whether that’s helping to expand infrastructure, advocating for progress in their communities, or simply taking an EV for a test drive to learn about the benefits of EV ownership.”

GM has recruited several prominent influencers to represent its “Everybody In” campaign. People like Peloton’s Cody Rigsby, gamer Erin Simon and Malcolm Gladwell who authored “The Tipping Point” will invite potential buyers to consider electric vehicles.

As part of its new advertising push, GM is also launching a new GM.com website. The new website will focus on GM’s EVs and its work toward autonomous vehicles. GM will highlight some of GM’s advancements and the people who are working to keep GM at the head of the electrical vehicle pack.