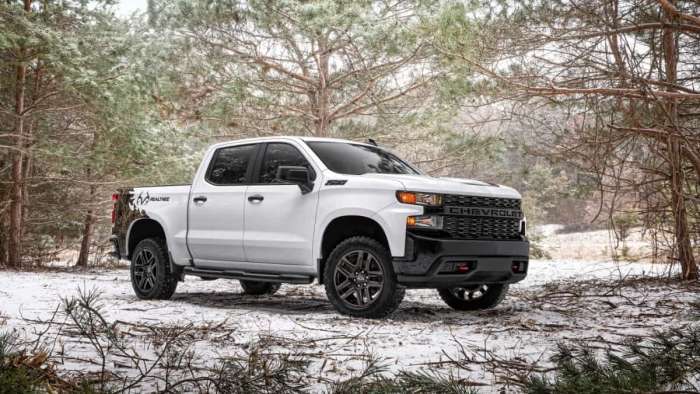 General Motors is reportedly calling up laid-off workers to help it meet its truck production numbers. One of the biggest plants affected is Fort Wayne, which builds Chevrolet Silverados and GMC Sierras.
Advertisement

General Motors is trying to build its most profitable vehicles, like the 2021 Chevrolet Silverado 1500 and 2021 GMC Sierra 1500, as quickly as possible. The huge automaker is still struggling to return to full production after being shutdown for two months because of COVID-19. Now union leaders connected to the plants, which build the most popular vehicles, are reportedly being told that the company will bring in more workers to help keep production up.

The Detroit Free Press is reporting that General Motors will allow laid off workers to transfer to the plants that need employees to bolster production. The Free Press says that the Fort Wayne, Indiana, plant, which builds the Silverados and Yukons, will get 318 workers. Flint, Michigan, which builds the Silverado and Sierra Heavy-Duty trucks, will get another 100. And additional workers will also be added at the Arlington, Texas, plant that builds the popular SUVs like the 2021 Chevrolet Suburban and the 2021 GMC Yukon.

Trucks Wars Are All About Profit

The truck wars are particularly important right now as both General Motors and Ram are trying to make inroads against Ford and its top-selling F-Series. Ford just revealed its all-new 2021 F-150, but it will be months before it gets to dealer lots. There is a lot of pent up demand for pickups after the COVID-19 shutdowns and all of the automakers are still attempting to fill sales orders and replenish depleted stock. Second quarter sales figures showed that sales for everything other than trucks and SUVs have fallen dramatically, so automakers are trying to build only what they believe they can sell.

Like other automakers, General Motors is trying to return to the pre-COVID-19 production levels. However, fears of catching the virus has frightened some workers into not returning. Some of the workers have compromised immune systems, others are concerned about putting fragile family members at risk. Several of the automakers’ plants have reported outbreaks of the Coronavirus, despite all of the new safety protocols that the companies have instituted.

General Motors just announced this week that it was temporarily dropping production at its Wentzville, Missouri, plant back to only two shifts. The plant builds the mid-size 2021 Chevrolet Colorado and 2021 GMC Canyon. The smaller trucks are popular but not as important as the full-size trucks and SUVs built at the other plants. The plant had been running three shifts but was having trouble getting enough workers to run the three shifts efficiently.

The United Auto Workers union has negotiated strict transfer agreements with all of the automakers. The complicated agreements allow workers to return to their original plants if more work becomes available or they can transfer to other facilities. General Motors has laid off workers at the Hamtramck assembly plant, in Detroit, as well at the Spring Hill, Tennessee, plant. It would make sense that some of the Detroit area workers may want to work in Flint, while the Tennessee workers could relocate to Texas or Indiana. Often, workers choose to retire if they have enough time to qualify, rather than move away from home. General Motors can hire new employees if they are unable to get enough workers to transfer.