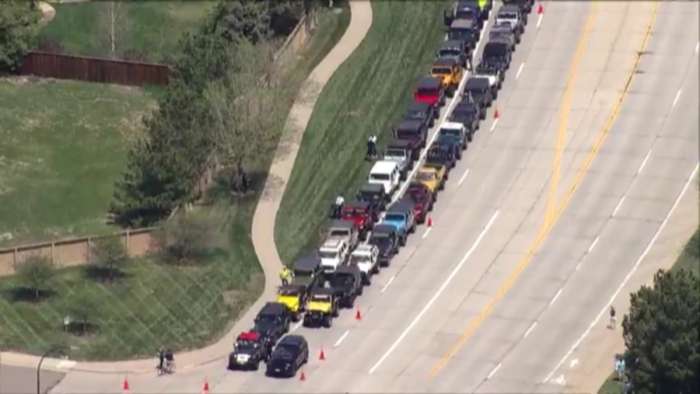 An Example of Why Jeep Drivers are Special

A recent gesture tells you why Jeep drivers are special. They take pride in being different, in a great way! Hundreds turned out to honor a brave, young man.
Advertisement

I snapped this photo of the image on the screen of KDVR, the Fox-Denver affiliate, as Colorado was saying goodbye to Kendrick Castillo. Castillo was the student who was killed while helping stop a classmate with a gun, at the STEM school, on May 7, 2019, in Highlands Ranch, Colorado. Two other students also helped subdue the gunman. In the photo, you see just a small example of why Jeep drivers are so special.

Jeep drivers came from all over Colorado and nearby states to honor Castillo. The 18-year-old Castillo died just days before his graduation. Kendrick Castillo was an avid Jeep driver, who took great pride in having earned the money to buy his Jeep Cherokee Sport. Other Jeep lovers put out the call and hundreds of Jeeps joined the funeral procession. License plates were visible from Kansas, Wyoming and Nebraska. People interviewed by the television stations said they came from cities, in Colorado, like Grand Junction and Pueblo. Castillo’s Jeep was also in the procession, driven by his best friend. Estimates put the number of Jeeps from 250 to 600.

Jeep drivers take pride in being rugged individualists, of following the beat of their own drums and following the road less traveled. They also appreciate those same qualities in other Jeep enthusiasts. When they heard that Kendrick Castillo, who is now being hailed as a hero, loved Jeeps they responded as only the Jeep community can. His love of Jeeps struck a chord. They turned out in force to support his bravery and his tremendous, selfless effort.

Jeep experts will tell you that their internal research shows that 90 percent of Jeep owners have personalized their vehicles in some way. Friends are quoted as saying that Kendrick Castillo had a lift kit and other equipment on his dark green Cherokee Sport.

As a journalist, I try never to express my opinion, but thought this extraordinary outpouring of support needed to be noted. Kendrick Castillo loved robotics and his Jeep. His tragic death may have saved countless others from being gunned down in the school that day. The larger Jeep community showed their respect and admiration for a young man lost way too soon.