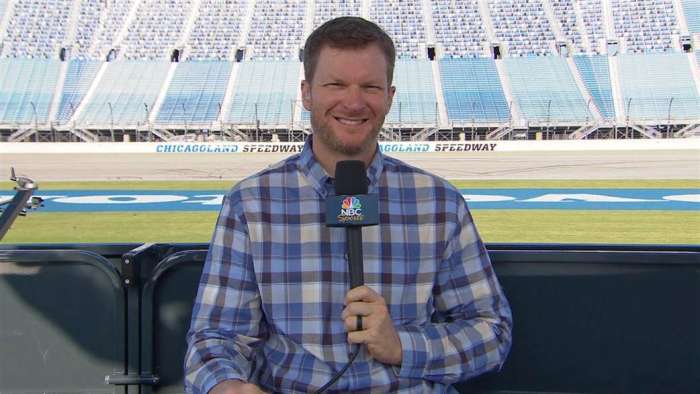 One of the most popular drivers ever on the NASCAR circuit is trading his race car for a different kind of "hot seat". Dale Earnhardt Jr. is making his debut this week-end as an analyst for NBC Sports.
Advertisement

Dale Earnhardt Jr. is following some of the other racing legends into a new kind of “hot seat”. Junior is working as a racing analyst and broadcaster for NBC Sports. Earnhardt updated his fans on Twitter about his debut week-end at the Chicagoland Speedway covering the NASCAR races..

In the video, Junior admits that he is nervous about his new job, and appreciates being able to do the two practice sessions this week-end so that he can be less nervous for his first big race in the broadcast booth on Sunday. In the video, Junior says he is “pretty excited” about the new job but cautions that he “has a lot to learn” from his new broadcast teammates, Rick Allen, Steve Letarte and Jeff Burton.

NBC Trying For a Fun Broadcast

Junior says he “is so glad that NBC is allowing us to wear casual clothes” during their broadcasts. Earnhardt also promises fans that at some point during the race season, fans will get to choose what the broadcasters have to wear, which should make the show a little more fun!

NBC has not detailed exactly what Earnhardt’s role will be during the shows, other than he will be reacting to what is happening on the track and offering some insight into what drivers may be facing during the grueling races.

It is no secret that NASCAR is struggling to keep fans coming to the tracks and watching the televised races. Organizers have changed the race formats to try and make the sport more interesting for some fans, but the changes have also driven some long-time fans away.

Earnhardt has been voted the most-popular race car driver 15 different times. Earnhardt retired with 26 wins in the Cup Series, a total which put him in the top 40 in NASCAR history. He has won the Daytona 500 twice. Clearly NBC is hoping that his analysis and color commentary can draw fans back to the sport.

Earnhardt is the son of another wildly popular driver, legendary Dale Earnhardt Sr. Earnhardt Sr. was killed in a crash during the Daytona 500, on February 18th, 2001. Junior announced that he was giving up driving because of the effects of too many crashes, concussions and other injuries, were taking a toll on his health.

Junior is having a big year in his personal life. He and his wife Amy welcomed a daughter, Isla Rose just two months ago. He announced the birth on Twitter. “Everyone was right. It’s a new beginning. Now everything I do will be for her and Amy. So blessed.”

Earnhardt covered two practice sessions before making his big debut during the Sunday race. “I’m excited to finally be at the race track with my teammates and getting ready to go to work, I’m just watching these guys and following them around to see how they prepare and what all goes into the days leading up to the race itself. It’s been extremely educational.”

He joked that the others are able to interact with the producers and ask to talk about different subjects while he is just learning.

“That should be very fun to just get up there and watch races and react,” he added. “All the guys in the booth are such huge fans of what we’re seeing, it’s going to be a lot of fun just doing that. Sitting around talking about what’s happening on the race track. I’m excited to learn a lot and get to know my teammates even better.”

Earnhardt has been practicing with Allen, Letarte and Burton, prior to his big debut week-end. It takes a while to get the rhythm of working with others and getting the pacing down. Earlier in the week, Junior said, “We’ve been talking about it for a long time. We’ve been practicing and here it is. It’s time to get to work. We’re going to have a great first weekend to kick off the next several trips to the race track. It’s going to be an awesome run all the way to Homestead.”

Dale Jr. visited the booth as a guest in previous years, and has made some appearances for NBC during the Super Bowl, Olympics and Stanley Cup Finals.

During his video on Twitter, Earnhardt thanked his fans for their support. “I appreciate the fans, your support means a lot to me.” He went on to explain “I only get to do it, if you like me, and I want to do this for years. Here’s to an early good start!”

The Overton’s 400 is scheduled to start at 2:30 p.m. ET on Sunday, July 1st, as Dale Earnhardt Jr. makes his professional broadcasting debut. The green flag will wave and signal Junior’s new journey, in Chicago, as NASCAR coverage shifts from FOX to NBC.