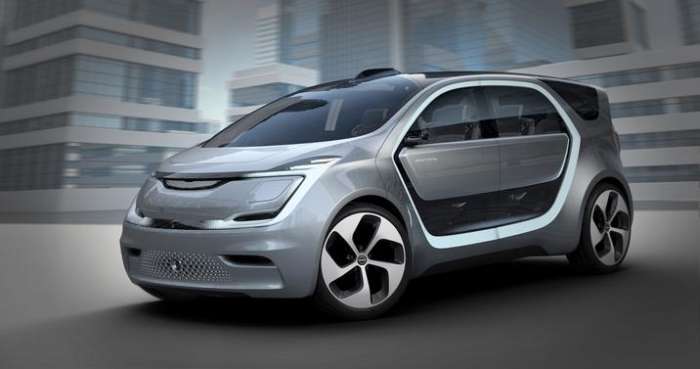 Chrysler unveils its electric minivan concept at the Consumer Electronics Show in Las Vegas. The vehicle is described as being designed by millennials for millennials. It can be self-driving.
Advertisement

The concept vehicle is filled with electronics so that the “selfie” generation can plug in to stay seamlessly connected with its social media. There will be eight docking stations for phones and tablets stationed through-out the electric vehicle.

The electric vehicle would get 250 miles per charge and could be partially recharged in 20 minutes.

According to the information released after the unveiling, Tim Kuniskis, the head of Passenger Cars brands for Fiat Chrysler says, “The Chrysler Portal concept is backed by significant research on the millennial generation. Millennials have clearly defined that they want a vehicle that will grow with them as they experience life changes.”

The concept draws its name from its unusual side doors. They open up and give phenomenal access to the interior. “The Portal’s exterior design is anchored by illuminated, portal-shaped side openings with articulating front and rear doors for easy loading and unloading of people and cargo.”

Because the batteries that power the vehicle would be located under the vehicle’s mid-section, without the need for a traditional engine compartment, the minivan could be more spacious.

The interior of the vehicle can be reconfigured several different ways and the seats will ride on tracks. According to the release, the seats can be folded into the floor for increased storage or easily removed through the back.

Millennials are described as having been born between 1982 and 2001. They have been difficult for the automakers to plan for because they are the first generation to be more interested in their phones than in having a car. Studies show they are late in getting their driver’s licenses. Many have no interest in ever driving. They are becoming the largest demographic. According to Chrysler’s research, “In the next 10-plus years, most will be at a point in their life where they will begin to start or will have started a family; 75 percent of all children will have a millennial parent and there will be 4 million more children than today.”

Millennials are the reason for the self-driving car push. The Portal Concept would be equipped with a semi-autonomous driving mode, which could auto-pilot the vehicle in certain situations, like highway driving. It could also be eventually upgraded to be fully autonomous.

For now, the Portal is just a concept. There is no indication of it actually going into production but several of the innovations included in it will more than likely turn up in future Fiat Chrysler vehicles.

Elon Musk Says Tesla To Offer Car Insurance in Texas Next Month, But These Challenges Exist
Tesla Co-Found Plans To Build a Battery Factory and Shift The Industry
END_OF_DOCUMENT_TOKEN_TO_BE_REPLACED