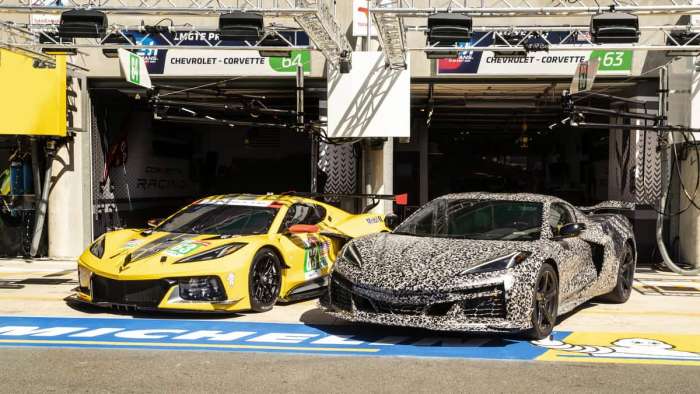 The automaker finally tells us when we will see the highly-anticipated 2023 Chevrolet Corvette Z06.
Advertisement

After teasing Corvette fans for months, Chevrolet is now announcing that we will see the 2023 Chevrolet Corvette Z06 on October 26th, 2021. Chevrolet is saying little else except that it has been testing the latest edition of its supercar on European roads like the famous Autobahn and tracks like the Circuit de la Sarthe. Chevrolet released a video of some of the 2023 Corvette’s French and German sight-seeing.

Z06 Pushed Back After Other Production Delays

Chevrolet confirmed last month that the hotly-anticipated Z06 version of the mid-engine C8 Corvette would debut as a 2023 model. Fans have been waiting for a Chevrolet mid-engine Z06 ever since the mid-engine Corvette Stingray was introduced two years ago. Chevrolet now says that the 2023 Corvette Z06 supercar will be revealed October 26th. Chevy did not give a specific reason for the timing of the reveal. Chevrolet has already released the new Z06 logo for the Corvette.

Word leaked in June that the mid-engine Corvette Z06 had been delayed and might become a 2023 version. The Corvette plant in Bowling Green, Kentucky has had a difficult year, first because of COVID, then the semiconductor chip shortages and then parts shortages, not linked to the semiconductor chips. A February storm in the southern states forced many auto suppliers to cancel production of petroleum-based parts. Many 2021 Chevrolet Corvette Stingray orders have been delayed into the 2022 model year production.

A website called GM Authority says the 2023 Chevrolet Corvette Z06 will be powered by “naturally aspirated 5.5L V8 LT6 gasoline engine, which features a 32-valve DOHC design and a flat-plane crank. Redline should be north of 8,000 rpm. Based on the same V8 found in the C8.R racecar, the LT6 in the 2023 Corvette Z06 is expected to produce around 600 horsepower and between 480 pound-feet and 550 pound-feet of torque, with an eight-speed automatic transmission sending it all rearwards.”

At this point, Chevrolet is not confirming any engine details. President Joe Biden said earlier this year that Corvette is also working on an electric version of the mid-engine supercar. Chevrolet is not commenting on when we might see that version.