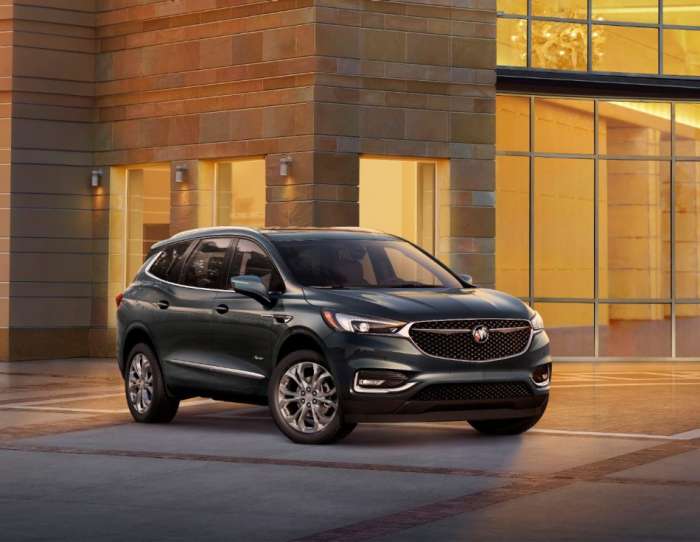 Not only is Buick taking the wraps off its all-new Buick Enclave, it is showing what the Avenir luxury trim package will mean for the global brand.
Advertisement

The New York Auto Show is where the automakers show Wall Street the products they have in the pipeline that are designed to keep the company profitable. One of the best examples of that is the 2018 Buick Enclave Avenir.

The Avenir is Buick’s new luxury trim level that was announced last fall. Similar to the GMC trim level of Denali, it indicates that the vehicle has special trim that sets it apart from the others. For the 2018 Buick Enclave, the Avenir trim will include an exclusive 3-dimensional mesh grille, special badging, pearl nickel 20-inch aluminum wheels and special premium interior materials like a wood-accented steering wheel; and Avenir-scripted sill plates on all four doors.

The Buick Enclave has been a stand-out vehicle for General Motors since it was rolled out in 2007 as a 2008 model. I was in Los Angeles when Tiger Woods was introduced as having had input on the design of the vehicle that brought a new generation of buyers to the Buick brand. The Buick Enclave may have been the most important vehicle for Buick in decades. Buick was no longer just for your grandparents, it had the hippest family hauler, that could compete with the Lexus and BMW.

The 2018 Buick Enclave Avenir is all-new from the wheels up. It is built on the same platform as the Chevrolet Traverse. It appears sleeker and should have better aerodynamics. The wheelbase is a little longer than previous models, which according to Buick makes it appear more athletic.

The 2018 Buick Enclave Avenir will feature Evonik Acrylite LED projector headlamps and LED tail lamps. The new LED lights will make the vehicle stand out and will feature automatic high and low beams.

In the press materials, Buick claims the new Enclave will have an air ionizer that will eliminate odors while also improving the air quality inside the vehicle. According to Buick, “The ionizer can help address external and internal odors and reduce bacteria, viruses, dust, debris and pollen, while also helping improve driver alertness.”

The 2018 Buick Enclave Avenir will feature all of the latest bells and whistles that the automaker has to offer including a new smart rear-view mirror. It is “a rear camera mirror that can function as a traditional mirror or as a camera, eliminating obstructions such as heads and headrests while expanding the rear field of vision by an estimated 300 percent.”

According to Duncan Aldred, the global head of Buick, ““This is a vehicle intended for Buick customers who demand the best and the latest our brand has to offer.”

Buick is not yet releasing price information. The 2018 Buick Enclave Avenir should be available later this year.