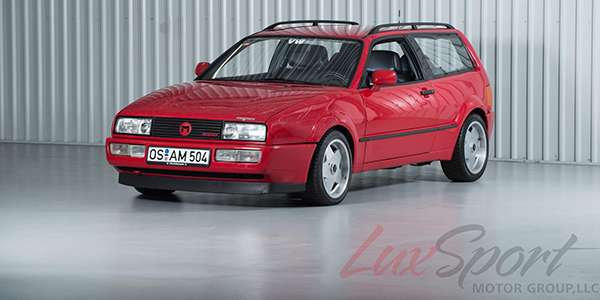 It is a rare occurrence whenever a prototype is available for sale. Usually, they are crushed or put into an automaker's collection. Imagine how rare it must be for two prototypes to go up for sale.
Advertisement

But that's the case for a dealer in New York which has a pair of unique Volkswagen Corrado prototypes. Known as the Corrado Magnum Sport Kombi, these two shooting brake prototypes were built as Volkswagen was possibly considering selling a more practical version of the Corrado coupe.

What's the story behind these prototypes?

Performance Auto and Sound magazine says Volkswagen reached out to Marold Automobil GmbH back in 1989 to build the prototypes - hence the 'M' logo on the prototypes. According to sources, Volkswagen planning to build as many as 200 models for the European marketplace. But plans were canceled in 1991 when Volkswagen couldn't make the numbers work, leaving Marold with the two prototypes.

"The vehicles were abandoned by Volkswagen and held by Marold, which eventually put the duo up for public sale. It put out ads for the pair at an astounding asking price of 3.2 million Deutschmarks, or over $2.2 million, which included all the paperwork, technical documents, wind tunnel test results, construction documents, German TÜV road safety appraisals and even prototype tools. The cars failed to sell, and disappeared off the map for some time," PASMAG said in the article.

In 2007, former VP of the Corrado Club of America (CCA) and rabid fan John Kuitwaard came across an interesting forum post on the VW Vortex forums mentioning the two prototypes.

“[Torsten] had posted a link on VW Vortex, but it’s funny, I had a friend who also posted saying that I would love to own these cars because he knows how passionate I am about Corrados. I ended up buying them!” said Kuitwaard.

It seems he bought them in the nick of time as the vehicles were sitting a junkyard with the real possibility of them being recycled.

Now that he bought them, it was time to get them into the U.S. But he wasn't able to do it until 2014 when both models had qualified for the 25-year import rule in the U.S. During the timeframe of seven years, the two vehicles were stored in Netherlands where Kuitwaard had relatives.

We highly recommend checking out the PASMAG article to get the full story.

I hate to ask, but how much are they?

Tesla Giga Berlin's New Hurdle: It's Not Only the Gov't, but Now Tesla Itself
Teslas Are Sold Out Until 2023, But The Timing May Reverse
END_OF_DOCUMENT_TOKEN_TO_BE_REPLACED