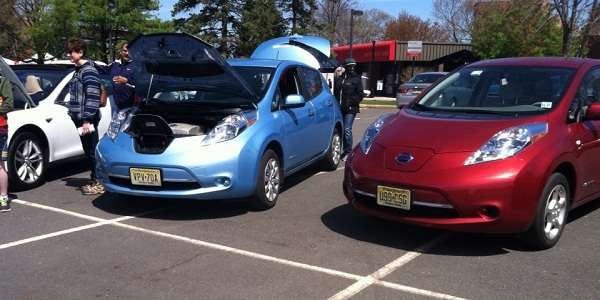 You Might Be Taxed for Every Mile You Drive

Next time you drive your green car Nissan Leaf, Chevy Volt, or Tesla S to name a few, you could be paying a tax on every mile you drive.
Advertisement

Imagine each mile you travel each day having an EZ pass type account debited for each and every mile you drive. It’s not a rumor, its already being implemented in one state.

Each day, more and more electric cars are being sold and leased all over the world. According to Plug in America we have over 300,000 EVs on the road in the USA and that number continues to grow and grow.

This is explosive growth and the mainstream media is almost deaf to the noise these cars aren’t making.

In response to this growth, governments have begun thinking of ways to milk the cash cow. In the wake of higher MPG cars and Electric Vehicles (EVs) that consume no gas, states have started to see declining tax revenue from the gasoline tax which is used primarily to fix and repair roads. So in order to combat this, Oregon has decided to implement a program that will tax drivers by the mile! Yes you heard it right, tax drivers by the mile. So the next time you think you want to buy a house in the suburban area of your dreams and drive that 30 to 60 mile commute, the government will be there ready to tax you. My feeling is this will hurt the people that live the farthest away from the metro centers. These areas are the suburban and outer suburban areas.

There are other issues surrounding this approach. For example, it has been shown over time that the heavier the vehicle the more damage it does to roads. So the trucks that deliver all of the consumables across America are really the ones most likely to be damaging the roads more so than passenger cars. Additionally, the crazy winters we have been having in the Northeast are more at fault than cars and trucks because the water freezing in the cracks and expanding damages the roads significantly.

So on the one hand the government is thinking of taxing you because you drive an EV or a PHEV (Plug in Hybrid Electric Vehicle) yet governments are also looking for ways to help promote EVs. The most recent example of this is Connecticut. The governor (Mallory) has introduces a $2500 tax rebate for people that purchase EVs in Connecticut.

There is a growing list of this type of incentive program offered by different states to promote EVs however you can see the conflict of interest that the government really has on its hands. On the one hand they are losing tax revenue from the gas tax and giving out rebates (giving away tax dollars) to promote the very thing that is contributing to the declining tax base.

mike w wrote on May 27, 2015 - 6:50pm Permalink
Taxing by the mile was my first thought but a flat fee added to the yearly registration fee is the easiest way to get the needed tax revenue. Charging by the mile with a box in the car costs more to enforce than it collects and seems so backward.
Douglas Stansfield wrote on May 27, 2015 - 10:07pm Permalink
Fair enough Mike W. I don't mind paying my share of taxes but my Electricity is taxed as well and the government should already know that EVs also contribute to tax dollars but just in a different way.
David wrote on May 28, 2015 - 2:16pm Permalink
I think I'll just keep my Hemi Challenger. Looks a lot better than an EV, sounds better, rides better and gets 23 mpg on the highway.
Douglas Stansfield wrote on June 7, 2015 - 6:20pm Permalink
I'm so done with gas...well almost. Love the quiet ride, the $0.03/mile cost to drive and the instant torque from zero. Gas is so 20th century to me.....
mike w wrote on May 28, 2015 - 8:11pm Permalink
Yes dough same with us. we also pay a few dollars taxes on our electric bill but I'm not sure what that money is earmarked for. We also have no problem paying our share as long as it is fair. In Virginia I pay $65 a year on my EV. I commute to work most days on a bicycle and with the ever shrinking range on our 2011 Leaf we average 3300 miles a year. This works out to 2 cents a mile in road user taxes. We are not complaining because that money is earmarked for road maintenance. The big difference is Road User Taxes vs. electric taxes. The taxes on the electricity for my EV is only a few pennies a month far short of the average $65 a month needed to maintain the roads.
Douglas Stansfield wrote on June 7, 2015 - 6:22pm Permalink
Until the gas companies stop getting tax subsidies, I'm going to fight EV taxes all day. Once gas companies stop getting the subsidies, then we can assist. No reason the most profitable industry in the world needs tax subsidies.