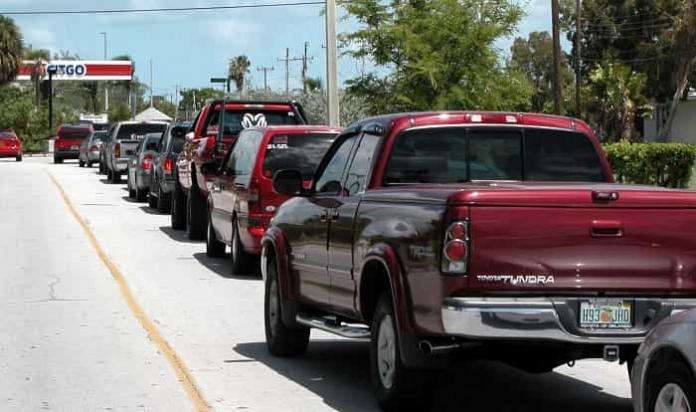 Hurricane Harvey may be opening a portal into the future. What it has artificially produced may be important in your next vehicle selection criteria.
Advertisement

I looked out my window today and beheld a sight that gave me an intense feeling of deja vu. I saw cars queued up to get gas at the gasoline station next door. The last time I'd seen (and participated in) this was 1979. I was 21 years old and OPEC had placed an oil embargo on the U.S.

Back then, gas stations would put out red or green flags, to indicate whether they had gasoline or were sold out. Lines could stretch for blocks around the gas stations. Eventually there were even/odd days, where the last character of your license plate would dictate which days of the week you could buy gasoline. Fist fights would occasionally break out between buyers.

Today, Hurricane Harvey has caused a short-term (we're told) hiccup in fuel delivery. Refineries, on the Gulf coast, are flooded and therefore, not producing. Flooding is so widespread, trucks cannot get to the source to move gasoline around the country. That makes an EV driver feel pretty smug, at the moment. However, my dad lives in Rockport, Texas, where Harvey made landfall. In Rockport, there is no electricity or potable water. An EV driver there, would be seriously stressing out about range anxiety.

Plug-in hybrid drivers are enjoying the greatest sense of relief. If the gas stations are out of gas, they'll use electricity. If the power is out, but you can find gasoline, they'll use that (they might have to manually hand pump the gas, if there is no electricity).

It's as if our infrastructure has been turned on its head. Normally, gasoline is abundant, as are the places at which it may be obtained. Electricity (i.e. vehicle charging sites) is relatively rare. Most drivers, that haven't made the switch to a plug-in vehicle, assume there are fewer charging stations than there are. Those of us that have plug-in vehicles know chargers are much more common than that. We see them because we are aware of them.

Since I drive the Chevy Volt, I almost always charge at home or at work. Even without public charging, I have been 96% electric over the 1-1/2 years I've had my current Volt. However, I can drive cross country at a moment's notice. We don't need to plan a trip, in great detail, in advance. Just like anyone who owns a gasoline-powered car, we can hit the road, without concern.

It's always good to have options...

David Vanderboegh wrote on August 31, 2017 - 11:34pm Permalink
Excellent piece! I've had my Volt for about two years. Like the author, I drive almost exclusively electric. Last time I put gas in it (all of 5 gallons): December. My '13 Gen I averages 45 miles of electric range in this weather, easily covers my 26 mile daily commute and most of my errands. I plug in at night, it's fully charged by morning and ready for a new day. Road trip? As Buzz points out, once the electric charge is depleted the car switches to gas and you can drive around 350 miles on a full tank. Fill it up at any gas station and keep going. Transition from battery to the gas engine is so seamless passengers don't even notice. Great highway cruiser and fun to drive. (Sustained high speeds will reduce electric range.) The Volt is an amazing car, I can't see myself ever going back to a conventional gas-powered car.
WadeTyhon wrote on August 31, 2017 - 11:40pm Permalink
We are feeling pretty good... having a Bolt and a Volt. Could go a week with no electricity before charging the Bolt. And we still have the same full tank of gas in the Volt that we had 2 months ago. So its there in an emergency. My dad is down to 1/4 a tank of gas in his Tacoma. He and my mom called to ask about our cars and complain about being unable to find gas. They're thinking of replacing one of theirs with an electric and keeping one gas car.
Dave - Phoenix wrote on September 1, 2017 - 11:17am Permalink
Excellent article. This has happened many times in the US. Pipeline failures and other disruptions in the distribution system, can also cause regional gasoline supply issues. In Phoenix, about 15 years ago, the main gasoline pipeline that feeds the Phoenix metro area failed due to corrosion issues, and caused the same type of problems with gas stations running out of fuel, long lines and high prices. It took nearly 2 weeks to repair and stabilize the situation. People in Phoenix has no idea how fragile the gasoline supply system was before that event. Similar events have happened in the midwest about 10 years ago caused by refinery issues. The Chevy Volt is uniquely qualified to handle such emergencies. 1. Because it can run on electricity for your typical commute, you can avoid having to buy gas for weeks until the gasoline distribution problem is resolve 2. During a storm, if there is an extended power outage, the Volt, unlike other electric cars, can still operate on gasoline until power is restored. One of the side benefits that I like most is that my Volt is almost immune to gas price spikes that may occur. Unless I have to make long road trip, I can wait out any gas price spikes, running on electricity for weeks and weeks.