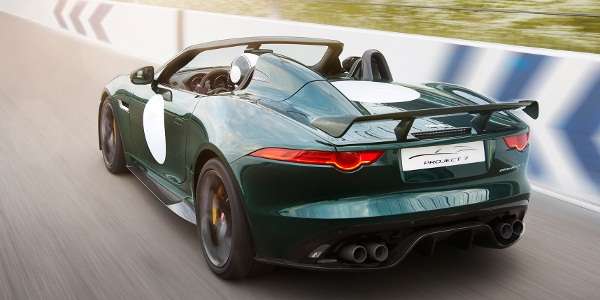 Jaguar Australia has just released information about pre orders of the “Super” F-Type jaguar that we thought might only be a rumor. Will the Project 7 F-Type usher in the SVR street version?
Advertisement

The hype for the upcoming SVR “Super” F-Type has picked up some steam because despite the possible price tag being over $300,000 and the low production the rumors just maybe true. At an estimated $130K over the cost of an F-Type R Coupe, will they be able to sell them?

Very popular British Race Car Driver, 24 Hours of Le Mans Winner in 1998, and Automotive TV host recently tweeted when asked about the possibility of a “Super” SVR F-Type said “I drove the Project 7 car at Pebble Beach so I know the SVR group at Jaguar are capable of brilliance, so who knows”.

http://www.motoring.com.au/ Jaguar Australia has confirmed that they already have 10 customers on a holding list to order one of the new SVR Jaguar F-Type’s as soon as they are built. They are also reporting that Jaguar will only build an estimated 250 of the “Project 7” F-Types worldwide.

Jaguar says of the Project 7 F-Type “It captures the legendary looks and extraordinary profile of Jaguar’s Le Mans winning D-Type racing cars. And as Jaguar’s most powerful production car ever, with all the capabilities of a modern super car, its performance is something the original D-Type engineers could only dreamed of."

Some of the unique features include:

Just one look at those race inspired goodies and you can see how this F-type will quickly become one of the rarest and most collectible Jaguar sports cars ever built. With reported zero to 60 mph times in the 3.8 second range and over 500 lb. ft. of torque, I’m ready to sign up for a test drive, are you?

Dave Robinson wrote on November 29, 2014 - 9:22pm Permalink
Wonderful car! I have the XKR which also is a wonderful car! So I am really looking fwd to this beauty's arrival!