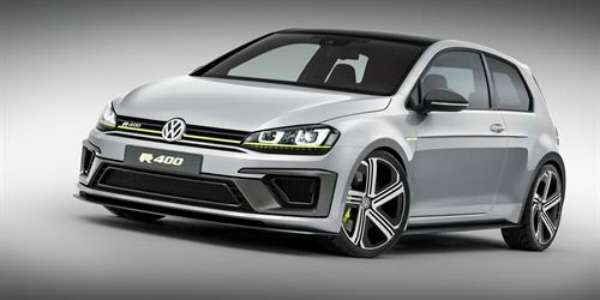 The Volkswagen Golf R standard is not short on power, but the 400 concept can take it from sitting to 62 mph in only 3.9 seconds, and could be doing it on a road near you soon.
Advertisement

The popular Volkswagen Golf really made a showing at the Auto China Show in Beijing with its Golf R 400 concept. Based on the standard hatchback, the Golf R 400 steps it up a notch—or three—with 400 PS (395 HP) and an extra 70 Nm of torque, making for 450 Nm in total, available from 2,400 to 6,000 rpm. The standard R hatchback weighs in with a turbocharged 300 PS engine and 4MOTION four-wheel drive—power, yes, but the 400 concept definitely has more than an edge.

The Golf R 400 has a modified Golf R engine, propelling the six-speed DSG-equipped concept from zero to 62 mph in just 3.9 seconds—a full second faster than the 300 PS standard. Additionally, the max speed is 174 mph. How does the concept achieve its increase in power?

The Golf R 400 is the same basic weight as the standard (1,420 kg.), even tho’ it looks different, 20 mm wider on each side with flared wheel arches, reminiscent of the 1988 Rallye Golf G60. Like most of the body, the arches are painted “Silver Flake” metallic, while the roof and carbon door mirror caps are painted gloss black. New sill extensions seamlessly bridge the gap between the widened arches. Filling those arches are 19-inch alloy wheels on an increased offset. A development of the Golf R’s standard ‘Cadiz’ wheels, these are highly modified, with high-gloss back inserts that act as air vanes, helping to cool the reinforced braking system. The tires are 235/35 R19s.

The front bumper has been completely redesigned to take into account the increased cooling requirements of the R 400. A carbon fiber splitter and aerodynamic “wing element” help push air towards the honeycomb mesh of the grill. The ‘R’ badge on the gloss black radiator grill pops on the “Lemon Yellow” background, and the “Lemon Yellow” horizontal stripe across the grill continues into the bi-xenon headlights, like the chrome strip on the standard Golf R.

At the rear, the bumper has vents on each side, and the tailpipes, unlike the 300’s four tailpipes, are two centrally mounted pipes, like the 2002 Golf R32. The pipes, 110 mm in diameter, are 200 mm apart, pointing up slightly, revealing a honeycomb mesh. To finish the look, the 400 concept sports a black double spoiler with LED brake lights on the tailgate.

And, inside? Motorsport shell seats with integrated head restraints and belt openings, upholstered in cross-quilted panels covered in Alcantara and carbon leather, as are two individual rear seats. Contrasting with the interior, the “Lemon Yellow” stitching ties the inside to the outside, and makes the whole look pop.

Sounds great, looks great, but don’t get too excited yet! The Golf R 400 is currently only a concept car, and Volkswagen has no production plans at this juncture--at least, they have not officially made that announcement. Car & Driver has reported that they received confirmation that the VW Golf R 400 will be built and sent to the showroom, although it has not been confirmed as to whether or not it will be in the U.S. market anytime soon. Car & Driver also indicated they were told that, “[VW] wouldn’t take this effort for just one brand," insinuating that the motor of the 400 might make it into Audi models.

shirl wrote on April 22, 2014 - 7:04pm Permalink
well! VW just keeps on surpassing itself...certainly no others to compete with :)