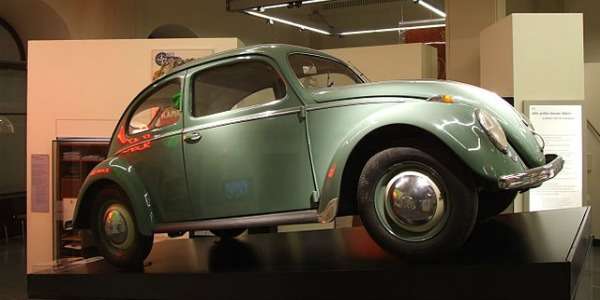 Over the years, the VW Beetle has gone up and down in market popularity, but refining the design along the way has brought it cruising into 2014 as the New Beetle, much to the pleasure of buyers in the U.S. and around the globe.
Advertisement

The Volkswagen Beetle, loved in the U.S. from 1949-present, still has its critics. But, after millions made and sold, it is easy to see that the doubters were wrong. “It’s never going to last,” the naysayers said as the 100,000th Beetle rolled off the line in 1950; today, amazingly, there are still those who predict the end of “the Bug,” even as buyers line up for the 2014 model.

The history of the VW Beetle did not begin in 1949, of course; they were being made long before, pre-WWII, in fact! The first production-ready Beetle debuted in 1939, at the Berlin Motor Show. WWII came to an end in May 1945, and the brand had rebuilding to do--and that took time. Exports of the Beetle began with 56 of the charmers being sent to the Netherlands in 1947. Although servicemen returning from the war had managed to get a few Beetles back to the U.S. as early as 1947, it was officially introduced in the United States in 1949, with the Deluxe “export model” Beetle, according to Edmunds.com.

Through the years, the Beetle has been “refined” with the changing times, but the classic shape--which contributed to its popular nickname, “the Bug”--has not been abandoned. At times the designed has been stretched to the limits, but that buggy shape has always remained!

Of course, it hasn’t always been easy for the Beetle.

Although market popularity--and availability--have come and gone over the years, the VW Beetle has always had a following. 1980-2003 are often considered “the forgotten years” for the Beetle, with plant after plant ceasing to make the vehicle. The last U.S. Beetle sedans were sold during 1977, and the final Beetle convertible in 1979. Around the world, demand was decreasing, as well. Oddly, however, the positive feeling toward the Beetle remained, which was a good omen for the car’s future, even if things looked pretty bleak at the time, with the ride disappearing from most markets around the world by the 1990s. Even in Mexico, where the green and white Bugs had become icons of Mexico City taxi service, when a law was enacted that required all taxis to have four doors, well, it was the end of the road for the VW Beetle--so it seemed.

Other models of vehicles, cheap, dependable and modern, had taken over much of the Beetle market. But, in the early 1990s, VW design studio manager J Mays and designer Freeman Thomas began working on a Beetle with a modern edge. And, after an extremely successful design display at the 1994 Detroit Auto Show, the New Beetle appeared in 1998. Edmunds original commentary on the New Beetle summed up the uniquely happy feelings that have kept the drive for the Beetle going all of these years:

"There is so much to say about the vehicle, but the bottom line is that it makes everybody happy; it's a fun, refreshing car that drips personality, right down to the smile on its hood. It also comes in an array of sunny, cheerful colors including red, yellow, white and black in non-metallic finish, and silver, bright blue, (lime) green and dark blue metallic hues."

It is just a car that exudes happiness and fun; how many cars can boast that?

In 2014, the VW Beetle is still rolling along, coupe and convertible, to U.S. markets and others around the world. “The world’s most iconic car,” Volkswagen proudly describes it, and owners--and wannabe owners--would no doubt agree! But, today the car has all of the power, necessities and options--including the 2.0L, 140hp TDI Clean Diesel engine, offering up to 41 mpg--a modern driver demands.

“Refining” with the times has allowed the VW Beetle to weather the low-points; love and nostalgia for the iconic design has kept a market available even when the Bug itself was not. And in the future? There is no reason to believe that the fun and happiness that is the iconic VW Beetle will be going anywhere anytime soon, no matter what the naysayers may have to add--some people will just always be turned off by anything that brings happiness and fun, after all.