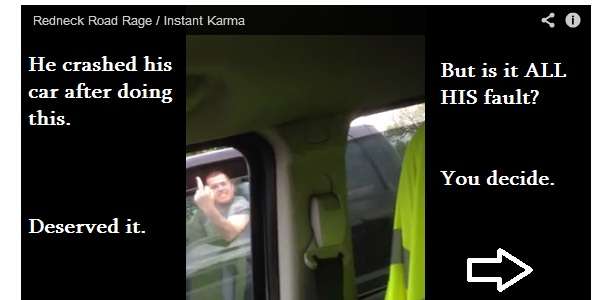 Florida Road Rage Driver: Why Is It All His Fault?

The Florida Driver Road Rage video may have people laughing at the wrecked driver, saying he deserved what he got, but did he? Didn't the Florida Driver incite the accident with her own obnoxious behavior: Slow-poking in the left-hand lane?
Advertisement

Road rage is never a good thing, but sometimes it can be provoked, as the following video clearly demonstrates; shouldn’t there be some measure of justice for that?

This video started making the rounds today, and the initial response is to say, “What a jerk! He deserves what he got!” But, is that really fair?

Now, okay, what the tailgater was doing was obnoxious and wrong, and we’ve all been in the place of the Florida Driver. But, at the same time, let’s be honest: We’ve also all been the tailgater, furious behind a car that refuses to just move over to the right lane, where they should have been in the first place instead of obnoxiously blocking the faster traffic. I mean, come on, she was going 50 in the left lane!

“That’s what you get,” the Florida Driver laughed—wickedly, might I add, when the driver of the truck angrily spun out ahead of her. “All on video, buddy!”

Any concern that he might be hurt? Nope, not on the Florida Driver’s part, anyway; she was too busy celebrating her road rage video disaster.

Now, what the angry tailgating driver did was wrong. He should not have lost his temper, and he should have just passed her on the right side and forgot about it as he drove away sanely. And, after wrecking, he certainly should not have left the scene of an accident (he has since been identified as Jeffrey Travis White and was charged with leaving the scene of a traffic crash). But, in my opinion, the Florida Driver provoked this man into a fury, and is a shining example of what NOT to do as a driver on our highways. Additionally, she is a good reason why authorities need to enforce those “slowpoke driver” laws, and ticket people who are impeding traffic, and she should also face some type of charges for inciting this accident.

What do you think? Let us know in the comment section below, because we are really curious on this one!