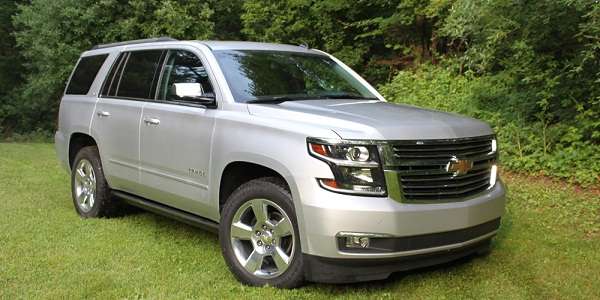 For years, GM’s Yukon and Tahoe have been the large SUV of choice for families looking to go camping, boating, or taking a long trip. An incredibly useful transporter and hauler, the Yukon and Tahoe's only real downside is their relatively poor gas mileage. In all other respects - utility, durability, style, and comfort - these large SUVs are top-notch.
Advertisement

However, poor gas mileage is starting to become a pretty big deal. With strict new federal fuel economy regulations just over the horizon, GM needs to improve the fuel economy of their large SUVs. While GM's clever new 5.3L EcoTec V8 is a technological wonder (it makes more power than the old 6.0L V8 GM used to offer in these vehicles), the Tahoe and the Yukon need more.

One solution? Offer a small clean diesel, similar to the Ram 1500 EcoDiesel that's also available in the Jeep Grand Cherokee. Diesel engines have come a long way since the 70's and 80's, when they were loud, dirty, and smokey. New diesel engines are relatively clean, quiet, and exceptional in terms of their power output and fuel economy. Here's why GM needs to offer a diesel Yukon and Tahoe post-haste.

1. Towing is Better with a Diesel
Towing is important to Yukon and Tahoe owners, as these truck-like SUVs are often used by families that need to pull a small trailer, boat, etc. Diesels have long been the engine of choice for towing, as they offer better low-end torque than gas motors as a result of their design. Since low-end torque is what you need to get a heavy trailer moving, diesels are the favorite of big truck buyers, RV owners, etc.

What's more, turbodiesel engines don't sacrifice performance at altitude. If you're pulling a trailer over the Sierra-Nevadas, your turbodiesel will maintain the same performance levels up to 10,000 feet. Most gas engines, on the other hand, lose 3% of their power for every 1,000 feet of altitude.

Finally, diesels are great for engine braking when coming downhill. Just drop your transmission into a lower gear, and let your diesel soak up speed. This will save the brakes on your vehicle and your trailer, keeping them cool so they stop you in an emergency.

2. Diesel Helps GM CAFE Requirements
If you haven’t been watching the automotive industry in the past few years, you probably haven’t heard of CAFE requirements. No, it isn’t a food safety thing. It is a government mandate to improve fuel economy by 2017 and 2025. All manufactures signed off on it and they are developing new ideas to improve fuel economy. These ideas include:

These technologies all add up to a more fuel-efficient vehicle that is initially more costly to purchase. A diesel engine helps offset this higher initial cost.

Lastly, the unintended consequence of the CAFE mandate is large vehicles like the Yukon and Tahoe are expected to meet high fuel-economy targets. While, it is debatable if GM can engineer the Yukon and Tahoe in such a way to meet these requirements, they would have an easier time with a diesel engine.

Why does this matter? If GM isn’t able to meet the CAFE requirements, they would pay a fine on each vehicle over the limit. This doesn’t make any business sense. A diesel is a quick way to meet these requirements.

3. More Money in Your Wallet
The fact is these large SUVs are used a lot by families for long-range traveling and camping (15-20k miles/year). Having a more fuel efficient engine would save these families more money than the average driver (10-12k miles/year).

How much better does a diesel engine do for fuel economy? Look at the new Ram 1500 EcoDiesel with its EPA estimated 28 mpg highway. The gas equivalent version (5.7L Hemi, 2wd) gets 7 mpg less. If you don’t think 7 mpg isn’t a big deal, it is nearly $1k better according to FuelEconomy.gov.

Customers have been demanding better fuel economy and it has risen higher on their vehicle needs list. Manufactures have mostly been paying attention and GM should follow suit on dramatically improving the fuel economy on the Yukon and Tahoe with a diesel engine.

4. Marketing Advantage
The Yukon and Tahoe are part of a select few truck-based SUVs. These behemoth vehicles used to dominate the back roads and highways of America. Over time, the smaller, uni-body crossover SUVs has become the vehicle of choice with their better fuel economy.

With the large SUV segment shrinking and GM making much needed profit from them, they need a compelling reason for customers to consider the Yukon and Tahoe again. Diesel power with better fuel economy is the right answer.

The fact is GM can do everything they want to spruce up the exterior styling and interior design and materials. At the end of the day, fuel economy puts them at a marketing disadvantage against the 8-person crossover vehicles.

5. GM’s Half-Tons Will Get Diesel
In probably the worst kept secret in the industry, the GM half-ton twins, Chevy Silverado and GMC Sierra, will be offered in the near future with a diesel engine. It makes sense with the recent success of the Ram EcoDiesel and CAFE requirements on trucks.

Since the Yukon and Tahoe are basically trucks, it makes sense for these vehicles to have a diesel engine option as well.

Also, because GM is already working on implementing a diesel engine, the R&D costs should be lower for the Yukon and Tahoe. GM has long been criticized for having a “silo” business operation. This should be tossed aside in the name of doing right by the customer and the large SUV team needs to work with the truck side.

At the end of the day, the reasons for the Yukon and Tahoe to get a diesel engine are pretty obvious. It should be obvious to GM as well.

Seva25 wrote on July 16, 2014 - 4:54pm Permalink
Offering a diesel motor in a big rig is a no-brainer. The problem lies in a fact that the companies charge thousands of dollars more for diesel-powered vehicles and, since the price of diesel fuel is already much higher than that of regular gasoline, the costs outweigh the benefits of owning such vehicles. I still do not understand why the diesel fuel is so expensive in the U.S., while it is often cheaper than regular gasoline in Europe.
Arlan Howard wrote on March 10, 2015 - 3:11pm Permalink
HI I am glad I read your message about diesel engines for Yukon and Tahoe! I have been thinking about that for a while before I saw the message. My wife and I really want diesel Yukon XL so bad. We would use the diesel Yukon XL to tow trailer that would weigh more than 10k lbs with better gas and also travel with 8 people/carpooling. very reverible. GM would be very surprised how many customers would buy them! we have been planning to buy diesel GMC truck but now we are more interested in diesel Yukon XL. I think it would be more benefits than pickups alone. Look forward to purchasing diesel Yukon XL!
Seva25 wrote on March 10, 2015 - 11:01pm Permalink
I agree wholeheartedly. Since many companies already offer diesel engine options in their trucks, I don't understand why they wouldn't make them optional on the SUVs as well.
Tim wrote on March 11, 2015 - 11:41am Permalink
I find your comment interesting that you assume a diesel-powered SUV would be able to tow 10,000 pounds. That would take a LOT of work and require a much heavier frame. It would end up probably being classified as a heavy duty SUV. Consider this, the new Ram 1500 EcoDiesel truck maxes out at 8,260 lbs. The gasoline 5.7L Hemi tows more than 10,000 lbs. Just because it is a diesel, doesn't mean it can tow more. There are a lot of other factors. The ultimate problem is the ride comfort of the Yukon would be significantly altered in a negative way with the upgraded frame and suspension needed to tow that amount. No way around it.
DALE STAHLER wrote on March 21, 2015 - 10:09am Permalink
Yukon and Tahoe diesel yea.
Ross wrote on June 23, 2016 - 6:14pm Permalink
My wife and I have a Tahoe that we've been driving for years. We need to get a new one, but we've been putting it off hoping for a diesel like the Ram ecodiesel, or something similar. I have a Ram 2500 diesel that gets 21mpg on the highway, which we travel a lot. We travel in the truck now because the Tahoe is getting old, and we want another diesel. GM needs to get with the program. Have you sent this article to GM. Someone needs to wake them up.
Chris shaw wrote on March 12, 2017 - 6:51am Permalink
If they made one I would buy one. I'm still driving a 2011 Yukon XL Denali. And I may have to go to a Navigator to get the towing capacity. But I love my Yukon and would prefer to stay with GM!!