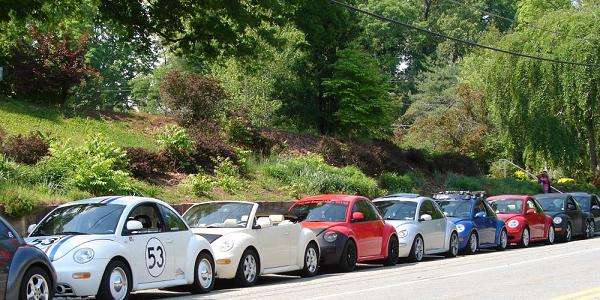 Chasing the Tail of the Dragon, VW Beetle Style

The Tail of the Dragon is a portion of US 129, located on the North Carolina / Tennessee border. Its claim to fame is its America's number one motorcycle and sports car road, with 318 curves in 11 miles. This stretch of road has some of the sharpest curves have names like Copperhead Corner, Hog Pen Bend, Wheelie Hell, Shade Tree Corner, Mud Corner, Sunset Corner, Gravity Cavity, Beginner's End, and Brake or Bust Bend.
Advertisement

Deals Gap is a popular and internationally famous destination for motorcycle and sports car enthusiasts, as it is located along a stretch of two-lane road known since 1981 as ‘The Dragon’.

The road earned its name from its curves said to resemble a dragon's tail. The stretch bears the street name "Tapoco Road" in North Carolina and "Calderwood Highway" in Tennessee and is signed entirely by U.S. 129. State Route 115, also included on maps, is the name used by TDOT for highway contracts.

Since part of the road serves as the southwestern border of the Great Smoky Mountains National Park, there’s absolutely no development along its 11-mile stretch, reducing or eliminating the danger of vehicles pulling out into the right of way. The road travels mostly through a forested area, including several scenic overlooks and pull-off points along the route.

The Tail of the Dragon VW Beetle Cruise, which began in 2008, is an event strictly for water-cooled Beetles, which include the New Beetle (1998-2010) and current-generation models (2012-2014). Sorry, no air-coolers or non-Beetle V-dubs here. The event, held during the first weekend of May, has grown expeditiously in size every since. This years’ event is scheduled for May 2th-4th.

Nearby Cherohala Skyway is quickly becoming number two with its remote 60 miles of scenic mountain highway. The area also has other incredible roads like the Moonshiner 28, Devils Triangle, the Diamondback, Six Gap North Georgia, the Snake and Great Forest Service Dual Sport Riding. The road was also used as a back drop for a scene in the movie “The Fugitive” starring Harrison Ford and Tommy Lee Jones.

Prior to 1992, the speed limit on the Dragon was 55 mph; with increased traffic it was reduced to 30 mph in 2005. The presence of law enforcement, especially on the Tennessee portion of the road, has dramatically increased over the years. It’s in one’s best interest to observe all traffic laws, avoiding a trip to the local JP to pay the fine in person. There are no exceptions!

The 2014 Tail of the Dragon "Six for Six" is expected to be an Epic gathering of Beetle owners and enthusiasts. The meet-up point is Bryson City North Carolina, The 3-day event begins with Friday check-in, along with a meet and greet, followed by ‘Pizza Fest’.

Saturday starts the actual ‘Dragon’ cruise; a day-long journey consisting of the Cherohala Skyway, followed by driving the tail of the dragon. The day concludes with dinner at the BBQ Wagon, fondly named by attendees as the ‘neon pig’.

Sunday, an optional day, is known as Six Chuter Sunday. Participants can check out after the farewell breakfast or stay an extra day to enjoy the North Carolina mountain region. The infamous Biltmore Mansion is a leisurely 65 mile drive away.

The Beetle Cruise of ‘the Dragon’ was established in the fall of 2008 by Gary Schreiber and Bob Saueraff and birthed through the newbeetle.org forums. The maiden voyage, held on Saturday May 9th, 2009, included 12 New Beetles from five states. In its second year, now coined TOD2, more than quadrupled to 53 New Beetles, in attendance from as far as California. TOD3 proved to be just as successful as the previous year, and established an official third full day of activities, as well as overnight lodging. Named after the newbeetle.org member who started the aforementioned, “SixChuter Sunday” it is now a part of TOD lore. TOD4, the Chinese year of the Dragon, was another year of great attendance and growth. That event brought ‘Movies at the Top’ outdoor flicks at the Ridge Top Motel, under the nighttime sky. TOD4 also brought the debut of the 2012 Beetle - a totally new Beetle, continuing the Beetle linage for VW as well as for TOD. But an even greater event was that of the ‘Oprah Beetles’ - in which all-new 2012 models were given away by Oprah Winfrey during her final season

Also added to TOD lists of activities, is a swap meet and a Sunday tour of the local dams of the region.

NewBeetle
NewBeetle.org was launched in November of 1999 by Jeff Croft. It was never intended to become what is has. Before long the site had a few hundred members. It was obvious that NewBeetle.org was well on its way to becoming the top Internet resource for Volkswagen New Beetle and now current-generation ‘The’ Beetle owners.

Nearly nine years later, NewBeetle.org has seen over 22,000 registered members, and averages between five and eight new members per day. Anywhere between 300 and 500 new discussion posts are created and over 20,000 pages are viewed by 1,000 unique visitors each day.
NewBeetle.org is driven by support from sponsors, which have ranged from aftermarket product retailers to Volkswagen dealerships. In addition, many members of the site have chosen to donate to the cause and become a Member Sponsor.

Lodging
Being this close to the date of the event it is highly recommended to book you lodging as soon as possible. Checking with the Ridge Top Motel in Bryson City, there’s already a waiting list. But there are other establishments that have received high marks from participants, such as the Sleep Inn and Microtel Inn. All the host hotels are conveniently located within an easy shot of the top.

The TOD VW Beetle Cruise is GTG not to be missed. So if this year is too short notice, be sure to plan for 2015. In the meantime I’ll be covering the event firsthand in a future column here at TorqueNews.com.