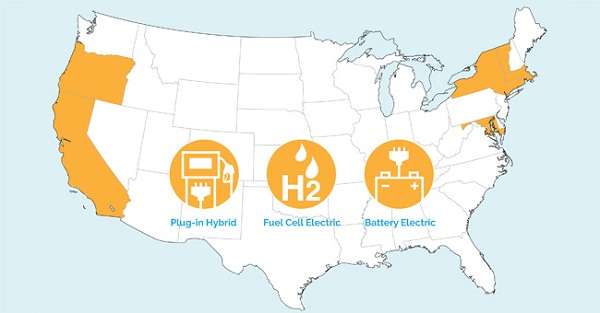 Zero-emission alliance among 8 states unveils plan for 3.3 million vehicles by 2025

A group of eight states has released a plan to facilitate the adoption of zero-emission vehicles, with the ultimate goal of placing 3.3 million such vehicles on their roads by 2025.
Advertisement

Those who feel strongly opposed to a powerful federal government often champion states’ rights. Electric vehicles have gained support from both levels of government. In addition to the federal tax credit for EV purchases, an influential alliance of eight forward-thinking states has proven itself very motivated to inundate their roads with zero-emission vehicles.

The group of eight states in question, led by the auto heavyweights California and New York, also includes Connecticut, Maryland, Massachusetts, Oregon, Rhode Island, and Vermont. The states in question collectively make up about 28% of the auto market in the United States.

In October 2013, the very same eight-state alliance released a Memorandum of Understanding to collectively put 3.3 million zero-emission vehicles on the road by 2025.

Many of the suggested action items are common sense, but they still must be addressed and this strong alliance of states will set an excellent example for other states in eliminating needless barriers to ZEV adoption.

Electric vehicle technology will without a doubt be ready to enter the mainstream by 2025, but both federal and state governments need to provide the proper conditions for the free market to take over and do its job. "We are demonstrating the commitment the states have for creating a healthy market for these vehicles," said Mary Nichols, chairwoman of the California Air Resources Board.

The items outlined by the Action Plan will play an important role in setting up the electric vehicle market for success rather than dooming it to a never-ending struggle against the persistent oil-dependent status quo.