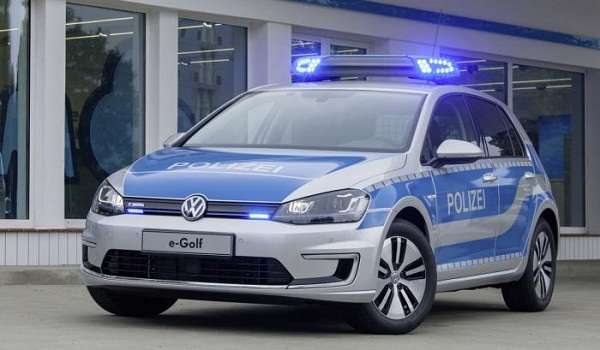 Volkswagen presented the e-Golf battery electric car as a police emergency vehicle at an exhibition this week. Though it wouldn’t last long in a high-speed chase, the e-Golf would be quite a stealthy cop car.
Advertisement

At an international police equipment exhibition in Germany, known as the Internationalen Fachmesse fur Polizeiausrustubg, Volkswagen unveiled a police-spec version of the VW e-Golf (via AutoblogGreen).

Any electric vehicle owner who has snuck up on unsuspecting pedestrians knows that the silence of EVs at low speeds is one of their coolest attributes. We’re sure that such lack of noise could prove advantageous in certain law-enforcement circumstances, particularly if the e-Golf were painted to blend in with the night.

Alas, the police-equipped version of the e-Golf is given its own distinctive paint job as well as the requisite flashing lights and communication equipment.

The rest of the e-Golf presented at the exhibition displayed the same specifications as the production model: 115-hp motor, 270 Nm of instant torque, 10.4 seconds from 0-60 mph, and range alleged to be between 80 and 120 miles.

Obviously, the main goal of using the e-Golf as a police vehicle would be emissions reduction. Replacing fleet cop cars with electric vehicles would have a great impact on carbon emissions, as police cars typically put on a great deal of miles per year. Though expensive up-front, the lack of maintenance in the e-Golf would be an advantage, as would the fuel cost savings from switching to electricity.

Any fleet considering an electric vehicle like the e-Golf or Nissan LEAF, which is already in service in a few select police forces, would have to be concerned with the car’s range and top speed. Electric vehicles are typically governed to a specified top speed to avoid draining the battery too quickly, and 80 miles of range restricts the operating conditions of the vehicle.

However, in cities and towns we can’t think of many better options (Tesla Model S aside) than the e-Golf. Cops would surely love to drive it, and it would save a great deal in operating costs and emissions.