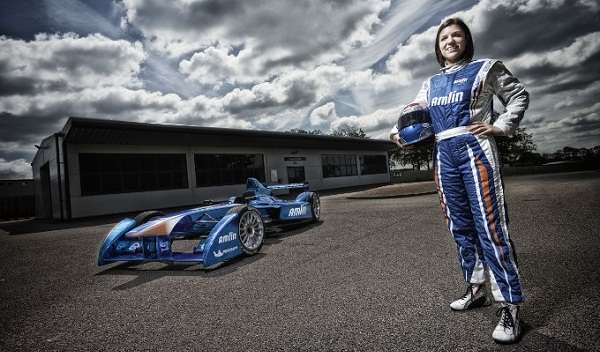 Women in motorsports is not as unusual as it once was. Most Americans are familiar with the name Danica Patrick, who made her fame as an IndyCar driver and now is racing in the NASCAR circuit. Without question motorsports are still male-dominated, but it is no longer a shock to see a woman driving a race car.

The new Formula E series continues the trend with the signing of Katherine Legge, a seasoned 33-year old race car driver from Surrey, England. Legge will be racing for the Amlin Aguri team and becomes the 11th confirmed driver out of an eventual field of 20 for the 10-race series beginning in Beijing this September.

Legge brings a respectable pedigree to the Formula E championship, having raced in the Champ Car, DTM, IndyCar, and the United SportsCar Championship series. She has also been behind the wheel of a Formula 1 car as a test driver in 2005. Also in 2005 Legge won the series opener of the Toyota Atlantic Championship at Long Beach, finishing the season 3rd overall. In 2006 Legge became the first woman to lead a lap in the history of the Champ Car series.

For her part, Legge seems excited about the prospects of Formula E: “For me this is a really exciting opportunity. The car is fantastic, it looks amazing and it will be very quick. Racing through the streets of the world’s leading cities will be an incredible experience and I think it’s a great chance to bring racing to the people. We will be driving in their cities on their streets.”

Formula E: the car and the series

Legge and her competitors will be driving the beautiful Spark-Renault SRT_01E, an all-electric F1-based vehicle boasting 270 hp and capable of reaching speeds up to 140 MPH. The Spark-Renault can rocket from 0-62 MPH in 3 seconds, and sounds like something out of Star Wars. To address battery capacity issues, each driver will be granted two cars per race. When the first car depletes its battery the driver will simply hop into the second car during a pit stop.

Perhaps the most intriguing aspect of Formula E from a racing perspective is that the series will take place in 10 different prominent cities across the globe, including Los Angeles and Miami. Each course will run through and around the city center, creating a much different dynamic than most racing fans are accustomed to.

“Formula E will be a very exciting and demanding championship and I think it brings an interesting new dimension to the sport,” said Amlin Team Principal Mark Preston. “This is as much about strategy as it is about driving fast – it’s playing chess at 220 km/h.”

Those hoping to see conventional motorsports will be disappointed by what Formula E brings to the table. But that is exactly the point – the electric racing series sets out to create something completely different, and at least one female driver will be a part of it.