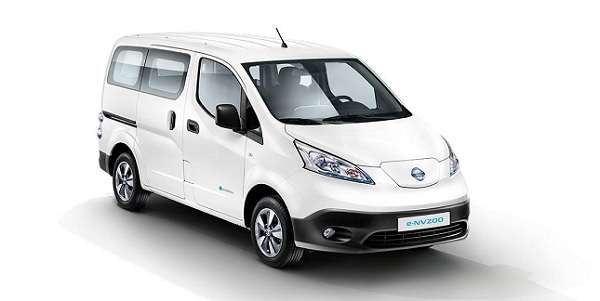 The Nissan LEAF is notable for spurning active cooling and heating systems in favor of passive thermal management for its battery pack, which has its pros and cons. The company’s all-electric e-NV200 commercial van manages battery temperatures differently, but might future LEAFs do the same?
Advertisement

Most electric vehicles use what is known as active liquid thermal management to control the temperature of their valuable battery packs. The systems are effective at keeping the battery temperature within the desired operating range, but add complexity, cost, and weight. For those reasons, Nissan felt it could do without active liquid cooling in the best-selling LEAF.

With the exception of a few cases in extreme desert climates such as Pheonix, the LEAF has not had major problems with batteries getting too hot and drastically affecting performance and longevity. The vehicle’s passive cooling system, which simply sheds heat to the atmosphere through forced air convection, has largely gotten the job done. To combat extreme cases the company will deploy a more heat-tolerant battery chemistry in future models.

The Nissan e-NV200 is a commercial van that uses the same powertrain found in the LEAF. However, the vehicle will serve a very different purpose: Nissan expects the e-NV200 to see heavy daily use and frequent DC fast charging as a result of fleet demands, which can generate significant heat in the battery. The battery pack is also more tightly packaged in the e-NV200 than in the LEAF, leaving less space for air circulation around the cells.

To combat this and keep the battery in the optimal thermal window to maximize the vehicle’s limited range, Nissan has developed a simple heating and cooling system for the battery (via Transport Evolved). It will simply draw cooled or heated air from the vehicle’s climate control system as needed and channel the air over the battery cells.

The company issued a statement saying the pack cooling will operate automatically during fast charging, which is clearly their largest concern as the vehicles will need to be charged frequently to minimize down time. Without active cooling to moderate the battery temperature, fast charging multiple times per day combined with heavy use could hurt the longevity of the e-NV200. The HVAC cooling system Nissan opted for may not be the most effective, but surely the company has done its homework and expects it to be sufficient.

Will future LEAF batteries use a similar system?

Possibly. Green Car Reports noted that Nissan “Chief Planning Officer” Andy Palmer has previously suggested the company would consider active air cooling for the LEAF similar to the system now found in the e-NV200. One has to believe that, with the next-generation LEAF and very likely revised battery packaging on its way, Nissan will choose to give its best-selling EV a more robust cooling system without breaking the bank for heavier and more complex liquid cooling.