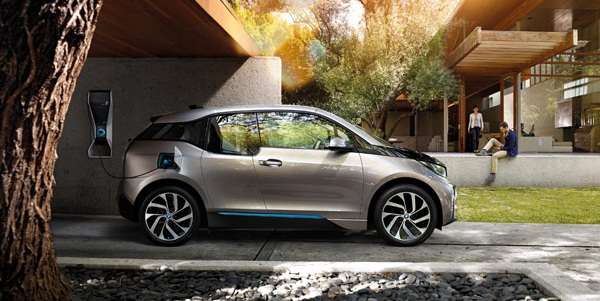 The most expensive yet most practical form of electric vehicle charging, DC fast charging is viewed by many as a big part of the solution to range anxiety. BMW now has unveiled the smallest and cheapest DC fast charger on the market.
Advertisement

In case anyone still doubted BMW’s commitment to electric vehicles, hear this: announced at the Plug-In 2014 conference in San Jose, the German premium automaker has partnered with Bosch to release the first wall-mountable DC fast charger that is half the size of the average fast charging station and costs just $6,548 – tens of thousands less than most fast chargers, which can often run from $50,000 to $100,000 installed.

The BMW i DC fast charger is just 31x19x12 inches in size, weighs about 100 pounds, delivers power at 24 kW, and can charge the 22-kWh battery of an i3 to 80% capacity in 30 minutes. Most of the first units will find their way to BMW dealers around the United States and Europe.

How did they do it? The biggest factor was the charging rate.

More power is not necessarily better

Conventional wisdom says the higher the power, the faster the charge. This is true for a depleted battery, but the advantage of higher charge rates diminishes as the battery fills. Charged EVs offers a superb explanation that can be found here.

In summary, doubling power rate does not halve charge time. This is because a 50-kW DC fast charger can charge an electric vehicle with a depleted battery at a rate of 50 kW only until the battery reaches a certain level of charge. It will gradually decrease the charge rate as SOC increases to protect the battery, so much so that the last 20% of battery capacity may take longer to replenish than the initial 80%.

This is where 25-kW fast chargers can undercut 50-kW chargers. DC fast chargers with 50-kW charge rates hold a significant advantage over 25-kW units below 50% state of charge, but beyond that point the advantage erodes significantly to the point where both units will output a similar power for the final 15-20 minutes of charging.

As Charged EVs points out, upgrading from 25 kW to 50 kW may only save 7-10 minutes of charge time. The lower power units also bring less risk of incurring costly demand charges from utilities.

Specifically for the i3, BMW North America’s Manager of Connected eMobility explained to Charged EVs that 24 kW was chosen “because it’s easier to install, it’s lighter and on the charging time for the i3 it doesn’t make much of a difference.” The company estimates an 80% charge only would take 10 minutes longer on the BMW charger than it would on a 50-kW unit.

The main incentive for lower-power fast chargers is the reduced cost. The use of a transformer-based charger (like most public DC fast chargers) necessitates large size and guarantees tens of thousands of dollars in cost, whereas 25-kW units like the BMW i DC fast charger based on power supply architecture can be made much more cheaply; hence the remarkably low price of $6,548 for the BMW unit.

Well aware of the range limitations of its ground-breaking i3, BMW has not ignored the charging infrastructure aspect of EV ownership.

The BMW i charger may be operated with a ChargePoint or ChargeNow card, and the company also offered another announcement related to charging convenience: BMW i3 drivers in California will be given free access to NRG eVgo DC fast chargers through the end of 2015.

The ChargeNow DC Fast promotion is applicable to the 100 DC fast chargers that eVgo has committed to deploying by the end of next year. ChargePoint administers the program, and the ChargeNow card allows users to access ChargePoint and eVgo stations.

Similar to Nissan’s No Charge to Charge Program, the ChargeNow DC Fast initiative aims to promote interoperability and ease of charging for EV drivers. Removing the barrier of infrastructure complexity and concerns is important for sales of electric vehicles, as is the increased availability of DC fast charging. BMW has taken the initiative in both respects, further demonstrating its level of commitment to the i program.