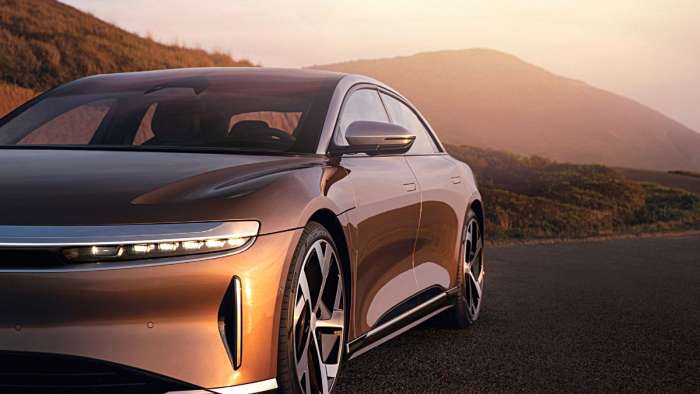 Lucid Motors Has Some Great Strengths!

Lucid Motors has some terrific plans and technology but $LCID continues to slide down. Here is what is next for Lucid Motors
Advertisement

Lucid Motors has a chance to disrupt the electric vehicle industry with their state of the art battery technology and their energy storage system. But these two aspects of Lucid Motors are being overlooked far too often.

Auto Analysts believe Lucid to just be an EV startup and that will have a tough time taking market share away from Tesla and other Auto Legacy makers that are pushing to make the jump into electric vehicles.

Lucid is so much more than an automotive company. They are a technology company that makes an unbelievable product that uses an electric motor that has turned heads in the automotive industry. Lucid can also make a ton of money in both the renewable energy industry and by licensing out their battery technology. I have written articles about these two divisions for Lucid Group in the past. However, $LCID is now down 50% since those articles were released, and I thought it was time to reiterate the potential that Lucid has in their other divisions.

Lucid is just starting to expand and could exponentially grow in 2022, which will shape up to be Lucid Motors most important year yet. With the Earnings Call coming up on February 28th, Lucid investors and supporters will hear all of the juicy updates that are needed for $LCID to rebound from this terrible last couple of months. Since reaching over $60 a couple months ago to now trading around $25, Lucid shareholders would like to hear some exciting things come from the earning call.

As Lucid continues to expand worldwide, reports are showing that LucidAirs have now hit the Autobahn and can be seen in Germany. That was a fun site to see for Lucid Motors as their brand is going to start to expand as drivers start seeing the head turning LucidAir on the AutoBahn and in Europe.

Lucid Motors twitter account has stated in January that more information about the Europe expansion will be released later in 2022. That was very exciting to see because Lucid Motors is trending in such a great position, but their stock as well as a massive amount of electric vehicle stocks are on the downtrend. A glimmer of hope for Lucid Motors near term trading is now on its way because we can get some very important information about Lucid Motors.

Investors hate uncertainty and this market is full of just that. Furthermore, if Lucid does have a good earnings call, that shows that Lucid is on track for the 20,000 vehicles produced by the end of 2022 and some other exciting updates, that would certainly ease investor sentiment for retail investors that invest in Lucid or plan to.

As we all know, Lucid Motors has a fantastic investor sentiment from institutions that continue to load up. Like Morgan Stanley who has bought shares at $35 but holds a $16 price target from an analyst that works for the firm. Institutions like Blackrock have increased their position by 66% in the last quarter of 2021.

My Thoughts About Lucids Strengths

Lucid has terrific battery technology and their renewable energy division could be worth more than their auto sales by 2030. Lucid should be analyzed by technology analysts and not auto analysts because that will allow for more accurate price targets so that retail investors know exactly what they are looking at when considering Lucid for an investment.

I am bullish long term for Lucid, the earnings calls will help determine where the nearterm trading of Lucid will end up, but for the long term, Lucid Motors is an incredible buying opportunity and should be on investors watchlists. I do believe Lucid will maintain the 2022 guidance for the 20,000 vehicles delivered and Lucid investors will respond pretty well to that. I am excited for the future of Lucid and all other EV companies because it is time to change and to save this planet with each disruptive innovation at a time!