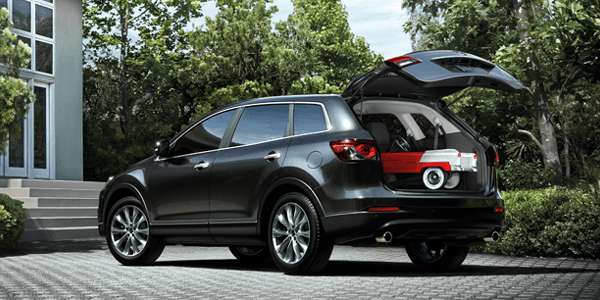 Where does it fit? The Mazda CX-9 is out of place in the lineup

The Mazda CX-9 is a competitive large crossover, but it's not much like any other current Mazda. Its replacement will likely be something very different.
Advertisement

Under Ford's partial ownership, most of Mazda's cars were based on Fords. The Mazda3 shared its underpinnings with the European-market Ford Focus and the Volvo S40. The Mazda6 and Ford Fusion were similarly related. The Mazda Tribute differed from the Ford Escape mainly in cosmetic trim. The Mazda CX-9 is at its heart a longer version of the Ford Edge.

But most of that has changed. Ford divested itself of its Mazda stake, and the company is now using its own resources. The Mazda3, Mazda6 and CX-5 are on Mazda-developed platforms using Mazda-developed engines. The Tribute is no longer in the lineup. The MX-5 Miata was always a Mazda through and through.

The CX-9 large crossover, though, remains. It's not a big seller for Mazda, or making a huge splash in the market, but it's the brand's only nod in the U.S. to customers who want a vast interior. It has a Ford-sourced 3.7-liter V6 -- the only six-cylinder left in the lineup -- and it favors luxury over sportiness.

Mazda recently redesigned the CX-9's nose to match the rest of the lineup, but the character of the car recalls the days of Ford ownership. The CX-7 midsize crossover (since discontinued) and the Mazda6 (since redesigned) shared a design philosophy inside and out that tried to emphasize sophisticated style. Well, sophisticated style and big blocky dashboards.

Where does that leave the CX-9? It's certainly a competitive car, with better handling and a roomier interior than many competitors -- even though it's one of the oldest cars on the market, dating to the 2007 model year. But without Ford's help, what will happen when at last it needs to be replaced?

My prediction is that it will become a very different car. Mazda can't afford to spend a lot of development money on a large crossover, which isn't core to its U.S. operations and wouldn't sell well in most overseas markets.

The Mazda MPV minivan is still on sale in Japan, though it hasn't been available in the U.S. for many years. Smaller than most American minivans, it would have to occupy a niche position in the U.S. if it were reintroduced here -- especially since Mazda no longer has its own V6 -- but it could retain Mazda's customers who want more room but are willing to give up some spaciousness (and power) for better handling.

Another possibility is that Mazda might give up on the market altogether, and send the relatively few CX-9 customers away to buy Chevrolet Traverses, Dodge Durangos and Toyota Highlanders.

The styling changes have given the CX-9 a couple more years of shelf life. But after that, don't expect another plus-size V6 Mazda crossover.