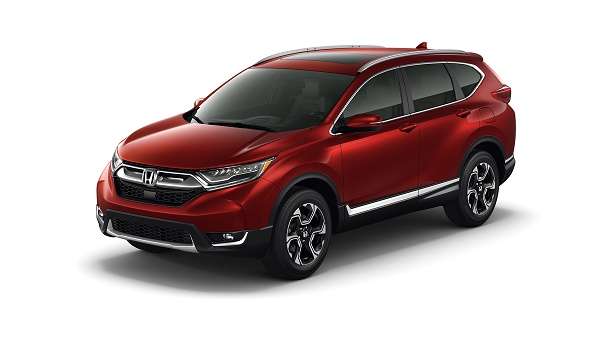 Why Honda CR-V Hybrid is not destined for U.S. markets

Earth Day 2017: Riding on the heels of Auto Shanghai 2017, Honda’s announcement of a dedicated 2018 CR-V Hybrid for the world’s biggest emerging auto market has green car proponents in the U.S. asking, why not here?
Advertisement

Honda CR-V 2 motor hybrid speculated for U.S. markets
In China, as in the U.S., electrification while on the rise is a very small fraction of car sales, and few examples of mainstream electrification exists in the crossover, SUV segment. There are several reasons for this market condition that go well beyond the world supply of lithium-ion batteries, or plug-in electric-only drive range.

The road to zero emissions is a slow, winding one

Presently in the U.S. by all accounts, cheap, plentiful gasoline, low interest rates, and manufacture dealership purchase incentives lure consumers into larger vehicles -- more specifically, extended cab pickup trucks, compact and midsize crossovers, and SUVs. Furthermore, consumers. more specifically, young mothers with children generally prefer the ease and utility of a 2 to 3 row SUV. There’s also that sense of "greater safety” found behind the wheel of a truck-like driving platform. I drive 2017 Honda CR-V Touring on the back roads of San Francisco.

With Honda’s commitment to world-fleet-wide 2/3rd electrification by model year 2030, due to strict government mandated emission reduction compliance -- the transition to market-wide electrification is moving at a much faster pace in Asia and northern Europe than in the United States. The Asian market responds to killer air quality through mass electrification, while reducing a huge dependency on imported fuel.

Also, the Chinese automotive market is driven by first time car buyers, many transitioning from electric motorcycles and scooters. Thus the electric vehicle is the norm. In 2016, China was the #1 plug-in electric car market in the world with over 900,000 units purchased. We drive Honda Clarity. Hydrogen fueled EV excellence.

2017 Honda CR-V is presently the segment fuel efficiency leader in the U.S.

As much as I’d like to drive a hybrid CR-V, I don’t see it coming to the U.S. in the near term. We’re presently in the first year of the 5th generation reinvented 1.5 liter turbocharged gasoline CR-V.. At best, the present CR-V is not due for a market refresh in the U.S. for 3 model years. And while an Accord Hybrid derived engine, motor and drive-train unit could be adapted for CR-V, the end result while more fuel efficient, would be heavier and more expensive. And then there’s the AWD drive-line and towing capacity to consider. Would consumers pay $40K + for a hybrid CR-V in the U.S.?

As a side note of interest: 1843 Accord hybrids sold in March, a mere 1.3% of American Honda auto sales for the month.