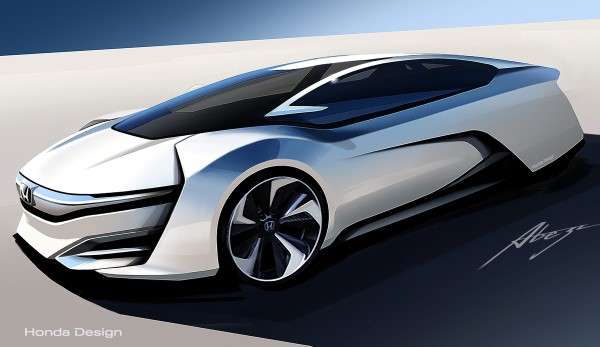 Florida’s a great place for a sit-down conversation with Honda as to the company's ongoing commitment to the development and marketing of alternative-fueled vehicles; and the company’s short-term marketing plans for EV, gasoline hybrid, hydrogen fuel cell development and retail sales. Honda builds all of them!

While visiting Miami Beach for the press release of the soon to arrive 2016 Honda HR-V, Parks McCants of Torque News had the opportunity to sit down and talk with American Honda Motors Senior Vice President and General Manager of the Honda Division Jeff Conrad, and Ms Angie Nucci, senior environmental and safety specialist. What is the future of Honda’s alternative fueled, and FCEV and EV propulsion vehicles?

With the missing in action lease-only Fit EV, the 2014 discontinuation of North America’s original gasoline/electric hybrid Insight, and the late in arriving 2015 Acura RLX-Sport-Hybrid, we looked to Mr.Jeff Conrad for an answer or two as to Honda’s marketing direction.

Ms. Nucci, very familiar with Honda’s fuel cell development, and alternative energy programs was present to answer any environmental or development related questions Jeff might not be familiar with. According to Ms Nucci, American Honda Motors remains on the forefront of environmental impact reduction, with notably the lightest, earth-friendly manufacturing foot print in North America.

Both attendees proved to be invaluable in filling in the “unknowns” with qualified conviction as to Honda’s “Blue Sky for our Children” philosophy of a not too distant future zero or near zero automotive produced hydrocarbon exhaust emissions; through alternatively fueled and electric powered personal automotive transportation.

Torque News: “Jeff, you've been around the auto industry through several up and down economic and gasoline retail price swings. In your opinion, is gasoline engine, electric hybrid car and truck development sidelined in this time of near historic low fuel prices, and if so, how does this effect Honda’s plans for an alternative automotive future?”

We spoke with Jeff for an hour, so we’ll break away from a formal interview format and brush on the main points learned while in in conversation with two people that sit at the heart of American Honda’s corporate epicenter in Torrance, California. Jeff Conrad began his career last century with the Ford Motor Company and has witnessed an ever changing industry survive the tides of time.

And yet, Jeff remains relatively positive in his outlook of the automotive industries low-impact, alternative energy-tied future. Jeff Conrad’s the kind of man you’d like to go out to lunch or shoot a round of golf with; in an earnest attempt to measure the temperature of the automotive industry, and what the future of fossil fuel-alternatives transportation might hold.

Jeff has an idea or two as to that future, but like most, if not all of us, doesn't hold a crystal ball in his intellectual arsenal.
Ms Angie Nucci is Honda’s go-to gal when it comes to qualifying Honda environment-related news. She’s been with the company for a decade, and yet she, like Jeff, remains excited as to Honda’s vital roll in the development of alternative energy based transportation.

Angie has promised to bring us up to date on carbon swaps, nothing we need to cover today. She too speaks of dealership energy assistance programs, hydrogen fuel cell development and California’s growing hydrogen fueling network; a critical component in the viability of near-future hydrogen vehicle sales. Angie’s the consummate Honda representative, smart and very likable.

Jeff tells Torque News that Honda isn't changing course as to its commitment to the development and marketing of near-zero emissions cars and light trucks, despite near decade low gasoline prices. Honda’s been developing and selling low emissions, fuel-efficient vehicles in the U.S. for well over 45 years, and will continue on the path of ‘’Blue Skies for Our Children.” A mantra that this world-wide automobile and motorcycle manufacturer lives by.

Jeff points to the road proven Honda Clarity FCEV with pride, as a viable path to Honda’s goal of “partial” zero emissions by California's (CARB) year 2022. Our research substantiates the fact that Honda R&D has been engaged in fuel cell development and testing for well over 25 years, and currently manufactures the smallest and highest energy generating fuel-cell-stack ready for automotive electric co-generation and battery module charging today.

We’re reminded by Jeff that several hydrogen fuel cell electric vehicles(FCX Clarity) have driven the roads of Southern California for years, passing the litmus test for reliability and viable driving-range between refueling stops. According to Honda, their next generation FCEV will travel 300+miles between refueling stops while transporting up to 5 passengers at freeway speeds.

Torque News: “Jeff, we have a pretty good understanding as to Honda’s intended timeline for the next generation fuel cell electric vehicle. In light of the recently discontinued electric Fit EV announced in Europe, and the never more than a very limited lease-only Fit EV program in California, what might consumers expect for U.S. markets as to a mass-produced stand alone EV or plug-in gasoline, electric hybrid automobile?”

How, when and how much ?

Mr Conrad wasn't willing to commit to specific technologies or time-lines, (he doesn't necessarily have that information in his pocket). Torque News respects Jeff Conrad’s candid reserve. However, Jeff did remind Torque News of the “2015 is the year of Honda” speech delivered by Honda’s John Mendel a month earlier at the Detroit International Auto Show.

Whereas Mr. Mendel Stated “ We all know that infrastructure is a major concern. So, we also recently invested nearly $14 million dollars in First Element Fuel to further accelerate the network of public hydrogen refueling stations in California. This commitment adds considerable momentum to the future infrastructure for fuel cell vehicles.” John spoke on to further state,
“Importantly, the FCV Concept we will launch in 2016 serves as the first of an entire new generation of Honda's future advanced technology vehicles. And today in Detroit, we're announcing that we will introduce an all-new battery electric model, and an all-new plug-in hybrid model by 2018,” said Mr. Mendel.

So, combining Jeff Conrad’s input as to Honda’s alternative vehicle development future and reading between the lines of the Detroit statement, we believe that Honda remains on track as one of, if not the most progressive automotive manufactures on the planet. Torque News looks forward to the release of the next generation Honda FCEV in 2016 for model year 2017; with the development and marketing of the next generation Accord Hybrid, Accord plug-in hybrid, Civic, and or Fit hybrid, and a plug-in fast charge Fit EV.

Our thanks to Mr. Jeff Conrad and Angie Nucci for granting this interview; much appreciated!